12 weeks to a faster 10K with Adidas' expert training plans 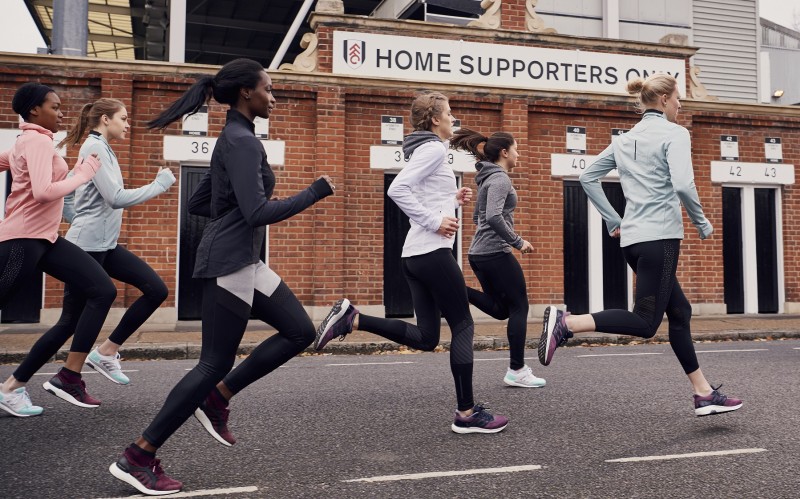 Running a 10K can be challenging, even for the seasoned runner. It's shorter than a half marathon, and much too long to be considered a sprint. That makes training for this awkward distance difficult.

However, it's an important milestone to pass for the beginner and a valuable training tool for advanced runners. Completing a sub-70 minute 10K run is a significant achievement for beginners who want to push their abilities and fitness levels, while experienced and strong runners can use the 10K distance to benchmark their power and endurance.

To assist with this important training distance, Adidas has produced a series of bespoke training plans, ranging from beginner level Sub-70 10K all the way up to the competition level Sub 40 minute times. Have a look at the training plans below, find your level, and see if you have what it takes to break through these important 10K barriers.

If you're relatively new to running or have returned the sport after a break, then aiming to perform well over 10 kilometres is a perfect place to start. Or, it you've been running for a while but your times are stagnating, then running a fast 10K is a great goal to keep you motivated and focused. Adidas' Sub-70 training plan is challenging for beginners, but its gradual difficulty arc should help you break that formative 70-minute barrier.

Pick three sessions each week from the below plan and make sure you include one of the tempo or adidas runners sessions in your schedule. You should aim for the suggested 'Total Weekly Run Time' but even if you miss a session here or there, you should still be on target to reach the Sub-70 benchmark. 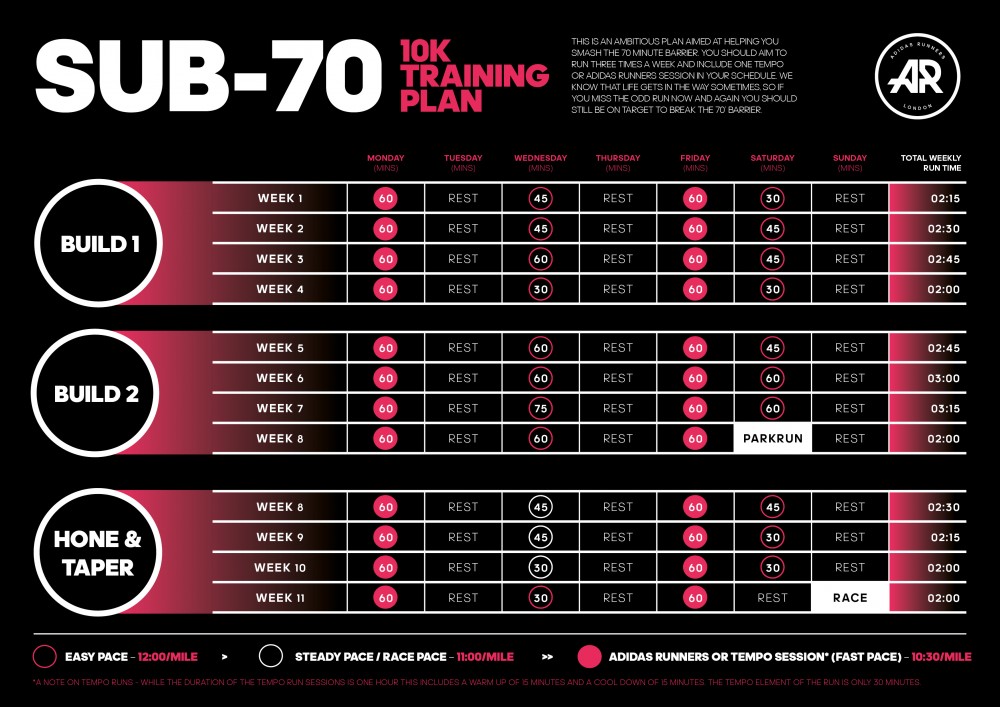 For intermediate runners, completing a 10K in under 60 minutes is a significant achievement that is major step along the path of developing your technical abilities and joining the ranks of serious runners. It's also a great way to build power and speed, which will be important aspects of your arsenal as you progress.

The Sub-60 plan is challenging and will require you to run between three and four hours each week with three rest days for every seven-day period. There is also a Park Run included in week two to help manufacture that competitive edge to keep you motivated. You'll be asked to run at a pace of around 9 minutes 30 seconds per mile, which is fairly brisk. 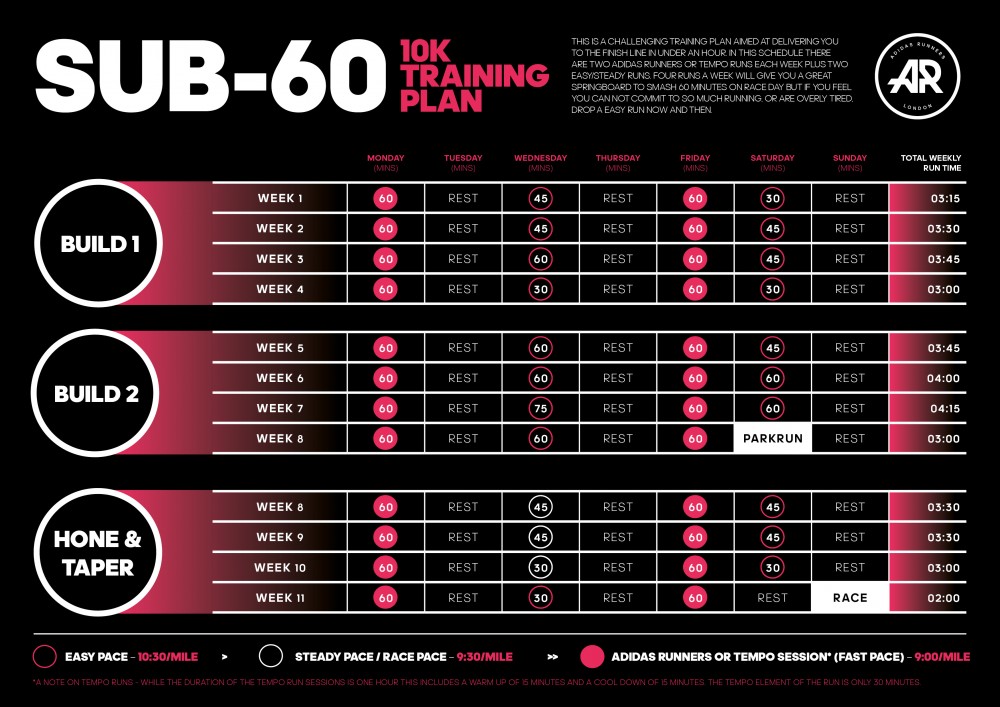 For experienced runners, having a Sub-50 minute 10K under one's belt is an achievement worth shouting about. It's a feat that requires a high level of fitness and this is evident in Adidas' demanding training schedule to help you reach this goal. Expect to run five days a week for between four and five hours at a pace of under 8 minutes a mile. 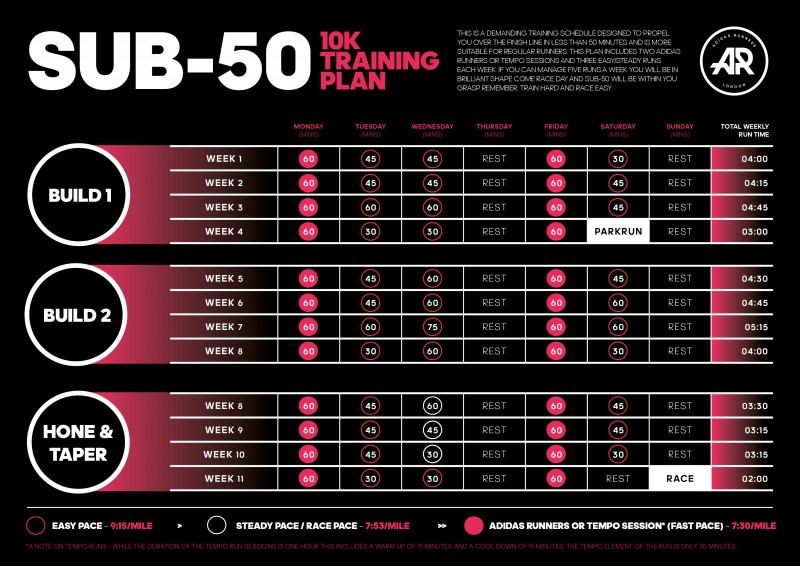 While the world record 10K is just over 26 minutes for men and 29 minutes for women, running a Sub-40 minute 10K remains an elite achievement and a stepping stone for those aiming to become competitive in the sport at the top levels. The Adidas training plan for a Sub-40 10K is very demanding, requiring you to run six out of every seven days, with weekly competitive Park Run participation and over four hours of fast paced (six minute miles and faster) each week. You will need strength and determination, but the achievement will be significant. 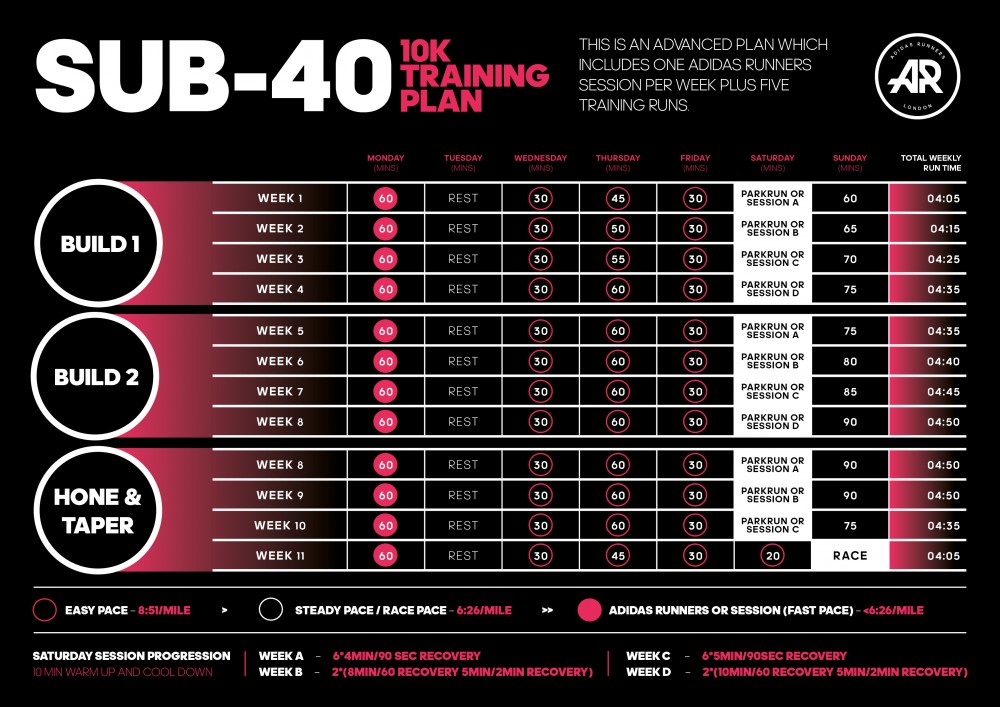