How Wiggle beat their best at the Great South Run 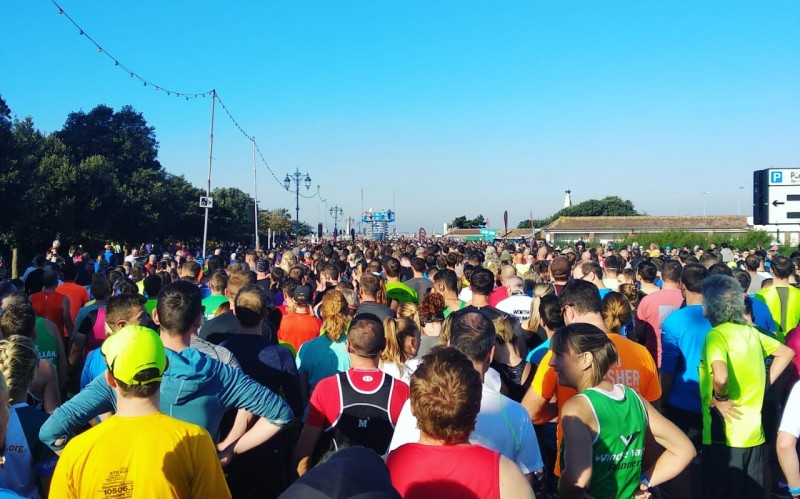 Now in its 28th year, the Great South Run has become a highlight in the running calendar. The ten-mile distance is a popular intermediate step between 10K and a half-marathon and the route, taking in such iconic sights as the Spinnaker Tower and HMS Victory, is mainly flat.

It’s not just the route that draws 20,000 runners to the City of Portsmouth every year. The race is famous for having an amazing atmosphere with locals lining every street, waving homemade banners and handing out sweets. The city becomes host to a whole festival of running, with 5K, junior and even canine events the day before the main ten-mile race.

This year, event sponsor Garmin invited a team of Wiggle runners to take part. Here’s how it went. 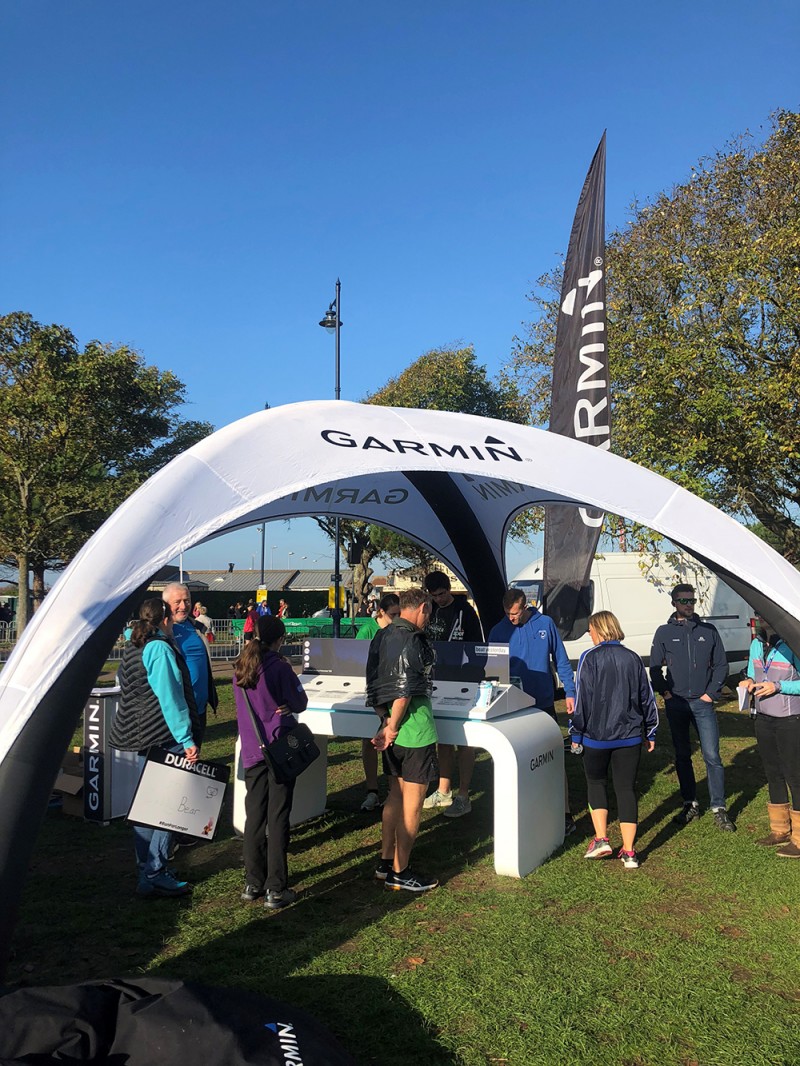 The Great South Run is right on our doorstep so it’s a must-do event for many of the runners here at Wiggle.

Sarah Pain and Alice Peyredieu are both Great South Run veterans. Alice wanted to beat her PB from 2017 and give herself a late-season goal.

For Sarah, a keen cyclist, the last time she completed the event was back in 2010. ‘I wanted to prove to myself that I could still do it! I don’t find running particularly easy - it doesn’t come naturally to me - so ten miles is a VERY big deal!’ Sarah told us. ‘Eight years ago, I did it in 1:27:59. Am I as fit now compared to my mid-thirties? I definitely do more running and cycling these days.’

Meanwhile, Lucy Baldwin is relatively new to running and only started to seriously train three or four months ago to prepare for the Ragnar Relay. ‘I signed up to the Great South Run because I wanted to set myself a challenge to see what I could achieve and feel proud of myself.’ Her boyfriend, Wills Fuller, signed up to support her in her first road race. 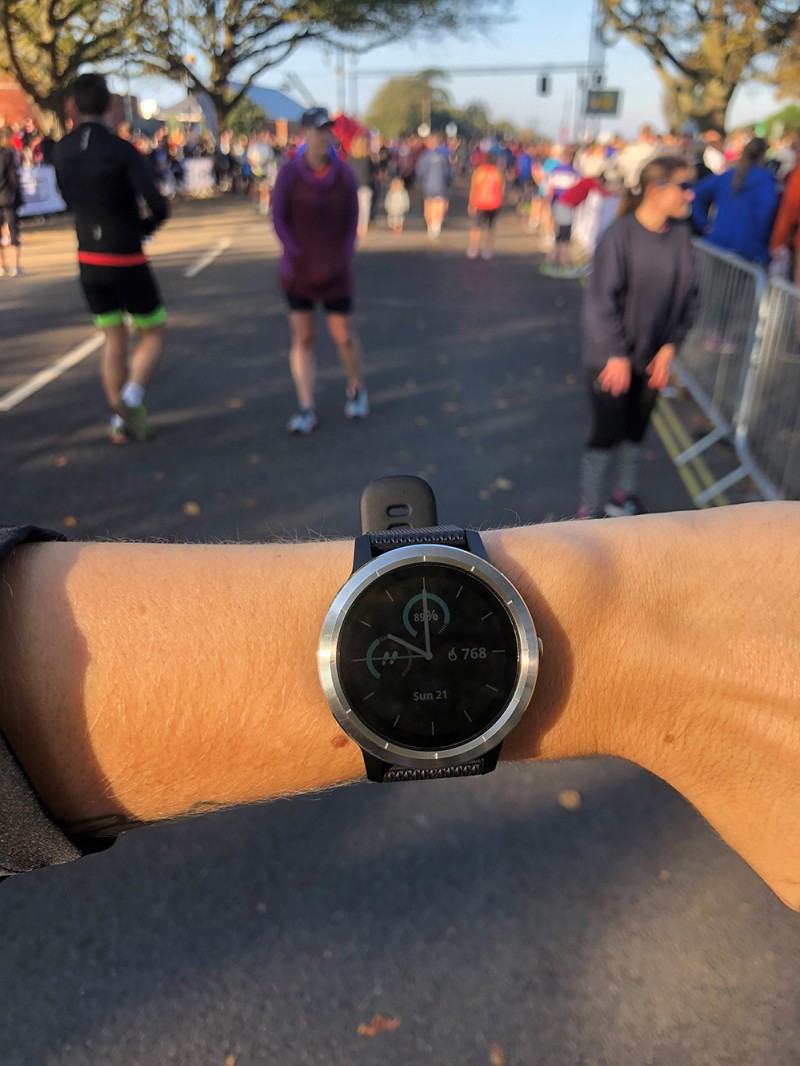 Garmin supplied our Wiggle team with GPS watches so that they could monitor their progress against their goals in training and on the big day.

Wills used the Garmin Fenix 5 Multisport GPS Watch. It’s packed with all the features runners need including in-built HRM, GPS navigation, smart notifications and provides real-time performance analysis. 'I've had a packed running calendar recently so I've had to take a consistent approach to training. I was part of the Ragnar Relay team a few weeks ago and just a week after the Great South Run I'll be competing in the OMM. The watch has really helped me to pace myself so that I have enough in the tank for the all-important sprint finish. It's also a really good morale boost to see how many miles you've run.'

Sarah used the Garmin Fenix 5S Multisport GPS Watch, a compact version of the Fenix 5. ‘I used my watch a lot during the run, to keep tabs on my pace and to see when I needed to pick it up to hit the time! I knew I was running too fast at the start, but I needed to dodge around people and wanted to start strong, so I knew I could afford to slow the pace a little later when I got tired around miles seven and eight.’

Alice had completed a half marathon just two weeks before the Great South. ‘I didn’t prepare in-between because I knew that my half marathon training would be enough. I’d been using the Garmin Vívoactive® 3 GPS Smartwatch throughout. I don’t think I could ever train without a watch. I like to know my pace at all times as well as my heart rate so that I can improve.’

The Vivoactive 3 boasts an integrated HRM, ‘activity proof’ weather resistant design and 15 pre-loaded sports apps. It was created to be a ‘do it all’ smart watch for active people. Alice found herself wearing it every day, whether she was cycling to work, at yoga class or running. ‘It also tracks your level of stress and tells you when you need to “move” if you haven’t done anything for too long.’

As a newcomer to running, Lucy found the Garmin Forerunner 645 Music Running GPS Watch to be an indispensable part of her training. ‘I had never run with a watch before now. It’s been great for keeping me on track. I’m quite competitive with myself, so if I set myself a mileage goal, it’s great for me to have the watch to remind me of how I’m getting on. It also congratulates you when you’ve ran your fastest mile, which for me is great, as I still need those little victories to keep me going.’ 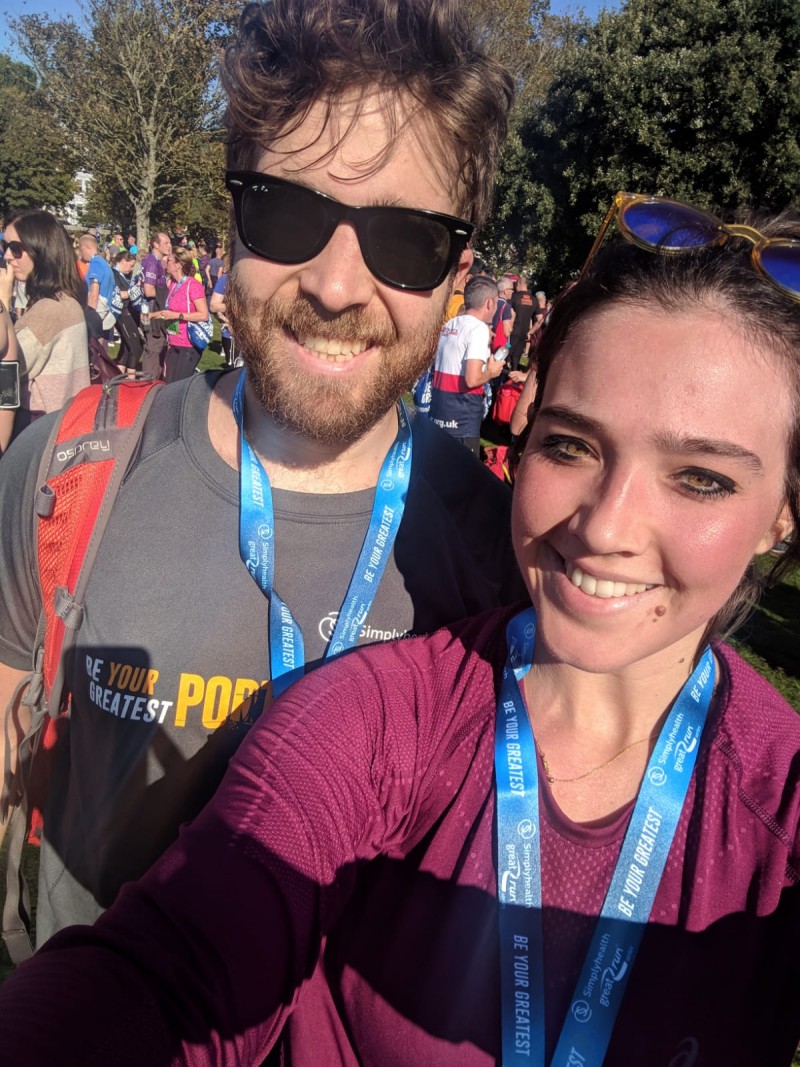 Perfect weather for a run.

Lucky for the Wiggle team, the weather at this year’s Great South Run was the best it’s been in a long time. Blue skies, low winds and glorious sunshine.

Even on such a beautiful day, it’s normal to have a bit of a wobble. ‘I was a bit nervous about lack of training,’ Sarah told us. ‘I had run eight and a half miles a couple of times two weeks before, but then I went on holiday. I was worried that my legs would forget what to do! Fortunately, they remembered.

‘I arrived at the event village in plenty of time to organize kit and soak up some of the atmosphere. While I was sorting out what to run with, the zip on my running belt broke. At least that made the decision about what to leave and what to take simple! I ended up running with just my Garmin watch and music to keep me going which was perfect.'

For Lucy, the key issue on race day was simply confidence. ‘I’m still new to running. I see the times of my friends and colleagues on Strava and beat myself up for being slower. Then I remind myself that I’m new and at least I’m doing it.

‘The atmosphere was amazing, and I ended up having a great time. It was a real boost to run past the bands and have the support of the crowds. I ran with my boyfriend Wills and he stayed with me which helped me through. It was so hot so staying hydrated was extra-important. I’ve also learned the value of a good pair of sport sunglasses – my RayBans just kept slipping down.'

'You can't go without saying thanks to the crowd - they really help you out' Wills added. 'The whole day was so much fun.'

Having run the event last year, Alice had confidence in knowing what to expect. ‘It’s such an amazing event and there’s always such a big crowd of people carrying you throughout the race. It turned out to be a great day for a run – almost too warm. I get hot easily when I run so I wore t-shirt and shorts and my adidas PureBoost shoes which I had worn through training.’ 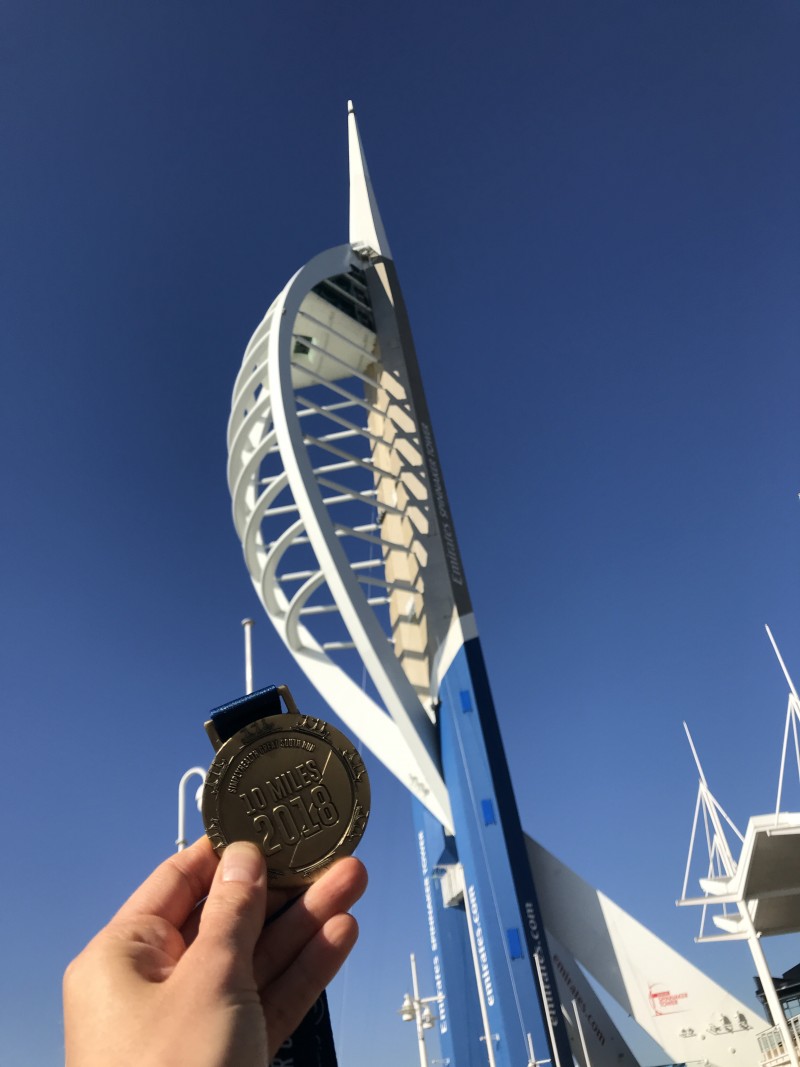 Did we smash it?

ABSOLUTELY! Team Wiggle had an incredible day and each of our runners did exactly what they set out to do.

Sarah confessed that she didn’t even know if she would get close to her 2010 finishing time, let alone dream of beating it. ‘I ended up taking three minutes off! Proving that age definitely isn’t an excuse. I pushed myself hard. Miles eight and nine were difficult but, looking at my watch, I was so close to beating my previous time I knew I had to keep going even though my legs were screaming!’

Alice also scored a course record. ‘The race was actually harder than I thought, probably due to the hot weather. After I finished I met with Sarah for lunch and a celebratory cake.

Lucy’s strategy had been to concentrate on her own run rather than compare herself to the other runners and seeing the miles ticking down on the watch gave her something to focus on. The strategy worked and, despite being exhausted and achey at the end, she completed the ten miles and even scored a 10K PB in the process! ‘Wills and I rewarded ourselves with a McDonalds then spent the afternoon chilling out. Bath time and nap time!! Just what I needed.’

For Wills, the highlight of the day was crossing the finish line with Lucy. 'Seeing the sense of accomplishment and satisfaction was worth it. And you also get a medal.'

Congratulations to Team Wiggle and everybody who ran in the Great South Run events. Will you be there in 2019? 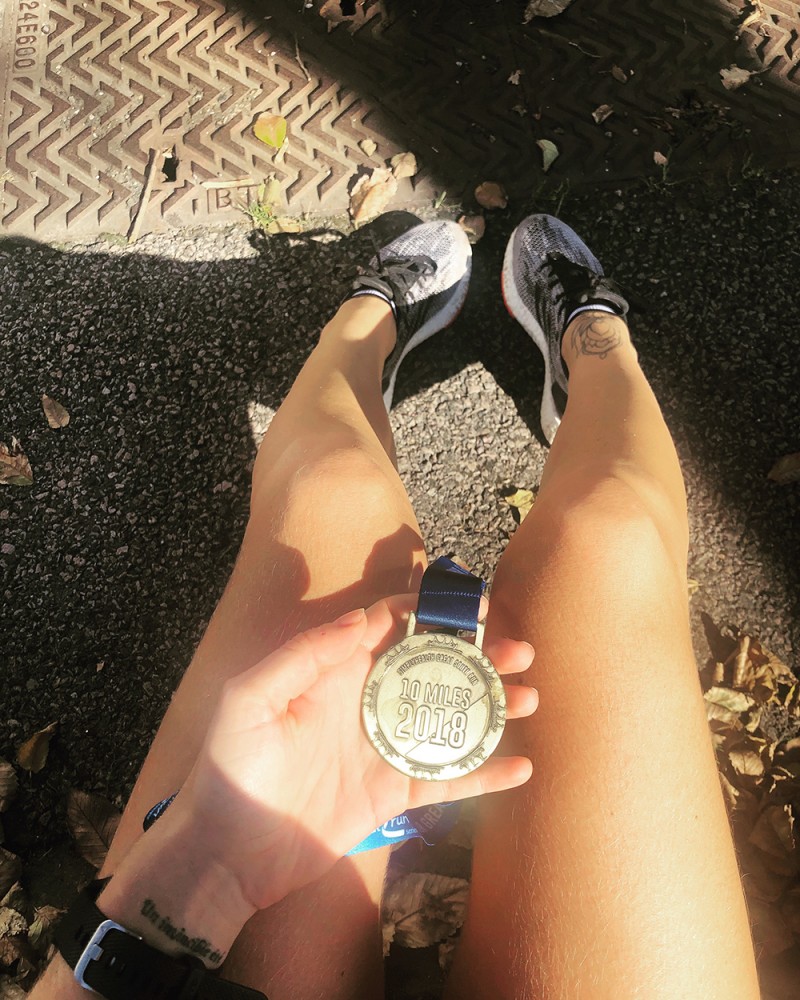