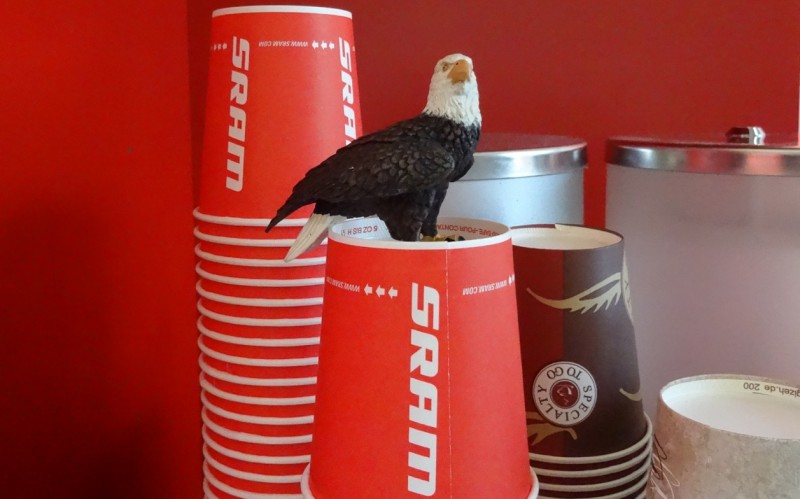 I remember when my razor went from a two-blade to a Mach3; then, someone else made a Quattro, and now we have a fusion of 5. However long you have been riding bikes, you will remember a new gear system coming along with one more cog than the last.

As SRAM launch EAGLE this June, we have now seen the 1st 1x groupset, offering a whopping 500% gear range! It is perfectly suited to the new generation of wider tyre bikes, like 27.5+; we have more traction than ever, and now have we have the gears to exploit it! 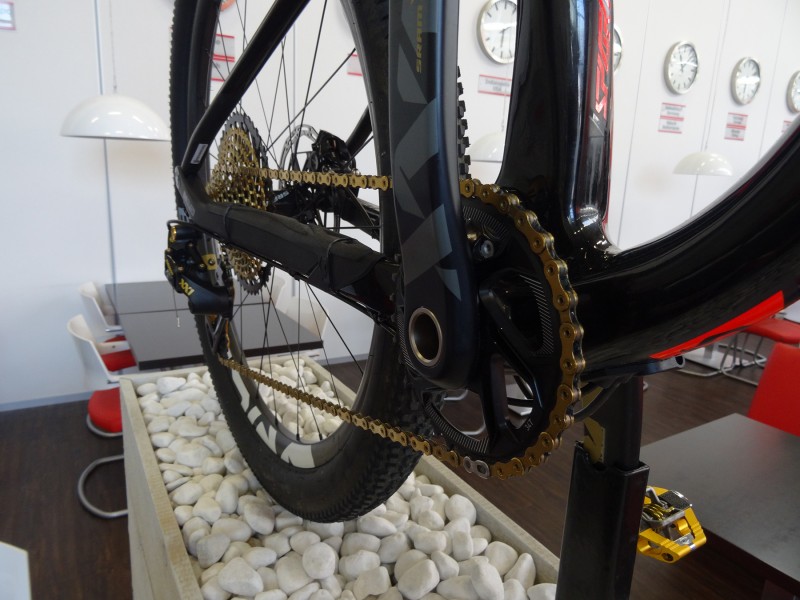 In this case more is less. SRAM's Eagle is the least amount of cogs, for a fuller gear range than the cycling world has ever seen. Ok, so it's got 12 cogs on the back, but the simplicity of 1x or one front chain ring means we don't need to worry about what gear combo we are in, it's just click one way for harder, or the other lever for easier. Simple. As SRAM's Drive chain product manager Chris Hilton so eloquently stated, nobody needs a front mech, nobody wants a complicated bike. 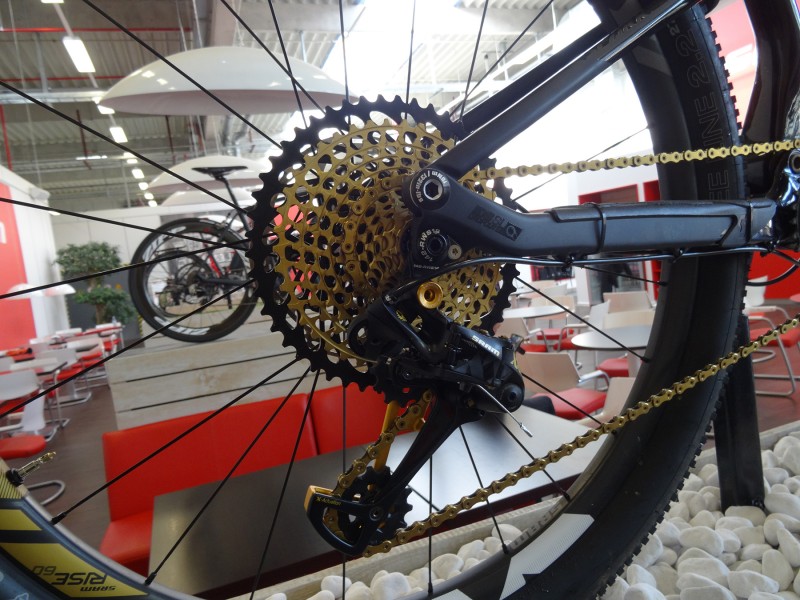 To launch Eagle, we were invited to SRAM Tech Headquarters, in Schweinfurt, Germany.  A facility with over 100 design engineers working on the future. These guys didn't look like boffins in lab coats; more (reassuringly) like riders in their jeans and Vans. 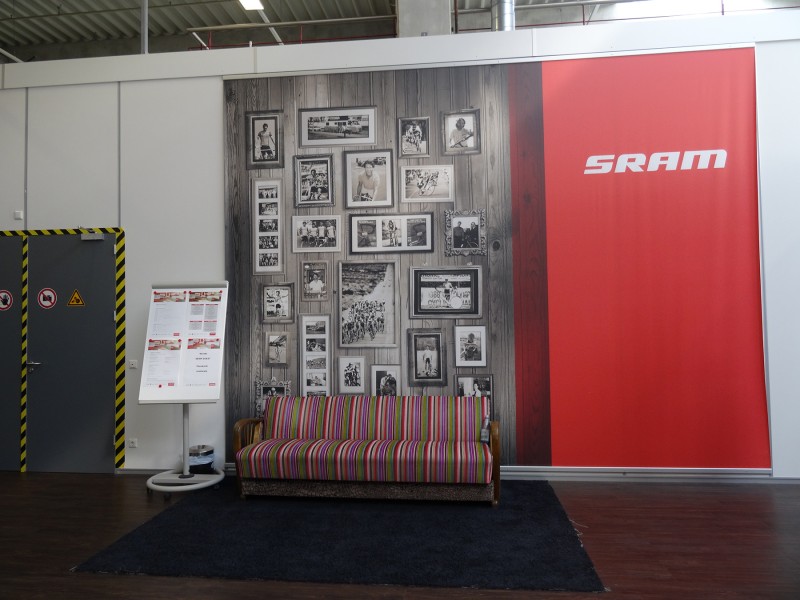 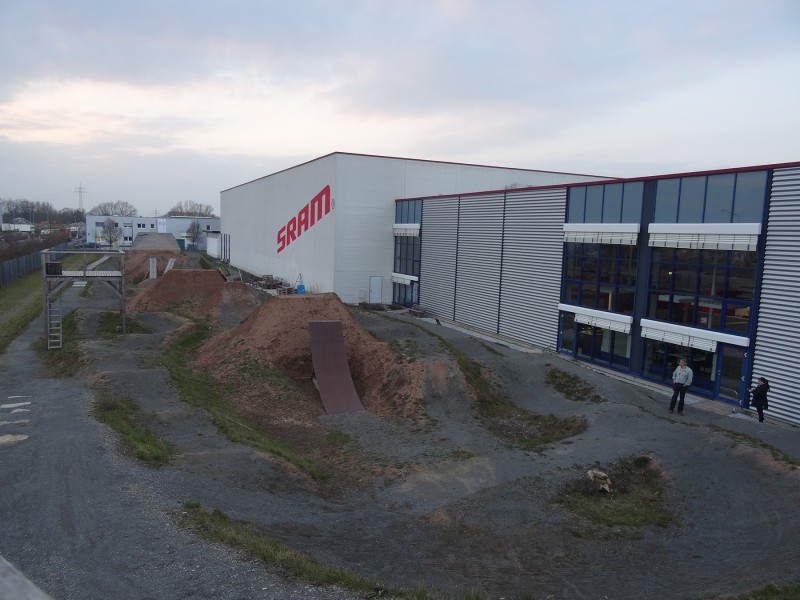 It maybe 1x, but its double bling

The SRAM Eagle system is the most distinctive groupset the bike industry has ever seen. The huge cassette, with a big cog of 50 teeth, dwarfs the 160mm brake rotor. The gold coating to the machined cr-mo steel detailing, makes it look like something no self-respecting rapper could do without. 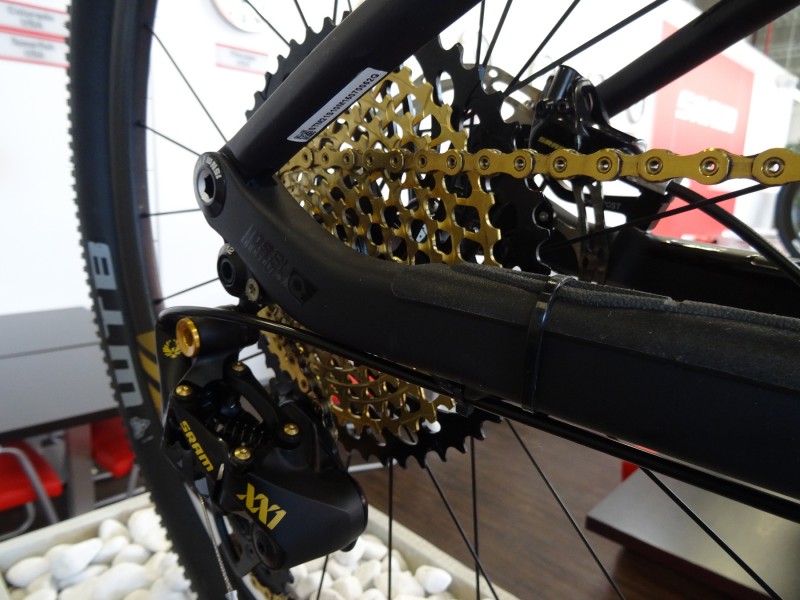 The secret is in the chain

The chain is the most important part, and the secret to the function of Eagle. It is called FLOWLINK, and the SRAM guys seem pretty proud of it: they say "it's the most advanced chain ever made by anyone, for a bicycle"

Its speciality is in its ability to bend across the distance of a 12 cog cassette. The magic, is in the curved profiling of the inner links.

Multiple front chain rings require chamfers, to help get the chain shifting up the front cogs with only a side force from a front mech. With no need to shift, SRAM's engineers have been able to focus on making this chain as smooth running as possible. 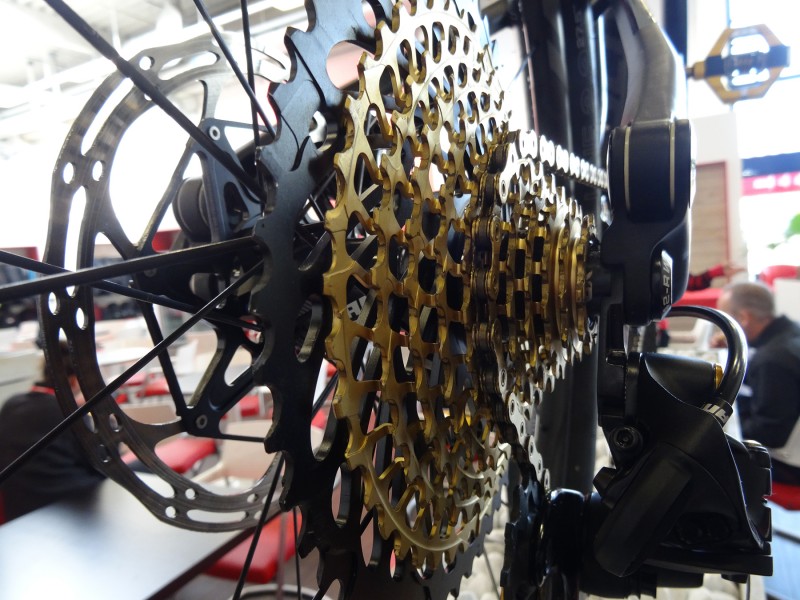 It is all about the acoustics

The chain's biggest riding benefit is in its acoustics: SRAM say it's the world's quietest chain. For me that's a big deal on two levels: I hate a noisy bike, and no matter how well set up it is on a muddy day, (of which there has been too many of late), you always seem to get a grinding. SRAM states this chain, coupled with the unique shark tooth profile of the cogs, eliminates grinding like never before. Something I'm yet to test, as the conditions in Germany were dry; but if  it is true, it means a quieter operation, and more importantly less wear (grinding means wearing). An Eagle cassette is seriously expensive, so it's a big deal if it lasts longer.

How does it ride?

At the launch, I got a spin on Product Manager Chris Hilton's own bike (Editor: Lucky man!). The previous day, he had been out riding in "as muddy as it gets" conditions; so we are talking about a well-used ride.

The first thing that I noticed, was that I didn't notice anything. We are all familiar with that cross chain noises, and vibration when the chain is bent as far as it wants to go from one side of the block to the opposite chainring. With Eagle, each click changed a gear with the same reassuring click as the next; going from the 42 to the big 50, maybe an 8 tooth jump, but it felt the same as anywhere in the block!

Pedalling in any gear felt as smooth as the next. Impressive.

I span the cranks backwards while in the 50 cog - usually a movement that induces a bit of vibration; but nothing for the oversized Eagle rear mech to complain about.

The rear mech takes all the features from SRAM's current 11 speed systems: you have the clutch that stops the chain bouncing around, coupled with the front chainring teeth that mean you won't lose your chain, even without a chain guide. The most noticeable additional feature on this mech system, is the longer cage and oversize lower jockey wheel - this helps to manage the extra chain length needed with such a wide range cassette.

A product for whatever way you ride

The cassette is the same across XX1 and XO1, so expect to see TR and EN riders going bling with some gold. Both systems also run on a standard SRAM XD driver freehub; the cog spacing is the same as 11 speed, with the extra cog 12th cog (50t) overhanging into the dishing of the wheel, by virtue of it being so damn big!

SRAM are onto something with this all-round compatability: In 2009, SRAM launched the first performance 2x drive chain.  2012 saw XX1 - the first dedicated 1x. Now, SRAM make eight different 1x groupsets, across various categories and budget levels. Eagle will spread its technological wings across many bike categories in the future: Eagle is more than 12 gears, it's a technology that will make future bikes better.

What do I need to run Eagle?

If you already have a SRAM 11 speed system, your XD driver rear hub will work with Eagle. In addition, you will need (brace yourself):

Steve has been around in the mountain bike world since the early 90's. Downhill World Champ racer, previous manager of the Animal World Cup Team; Steve K knows his stuff when it comes to knobbly tyres!