Share
Posted in Triathlon and tagged Triathlon, you can, get there, IWD, swim, bike, run, cycling, running, swimming, open-water swimming 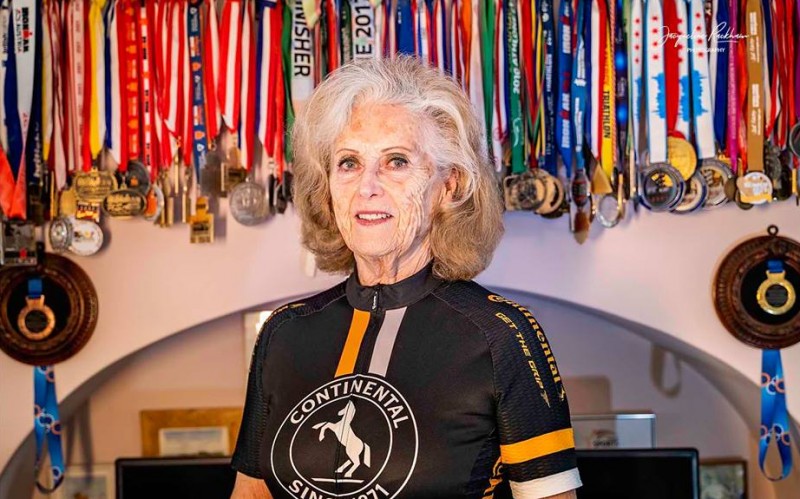 Daphne Belt is living proof that you're never too old to #GetThere.

Daphne was fifty when she started competing in triathlons. This year she'll be turning 80 but she's not slowing down any time soon.

Wiggle buying manager Martin McKinlay, who competes in the 30-34 age group, caught up with Daphne to find out more about her illustrious career so far.

What was it that made you want to start competing in triathlons?

Turning fifty made me stop and think about why I was not as fit as I was when I was young. Forty had not bothered me the way it does most people.

Triathlon has become incredibly popular in the UK in the past ten years. How many people were competing at races when you first started?

I started in triathlon nearly thirty years ago. A young friend of ours, James Clarke, introduced us to the sport with a copy of 220 Triathlon Magazine that he had picked up. Very few people were racing back then.

He told us about an event near to us that he had competed in. We were inspired and soon after that after my husband Steve worked out a bit of a training plan, although in truth none of us knew much about triathlon.

Steve joined James at the next race. I had to brush up on my swimming and learn to do front crawl before I took the plunge at my first swim run, the Damp Dash at Kingston upon Thames. At the time it was under the direction of John Lunt who went on to create Human Race, one of the world's biggest sporting event organisations. 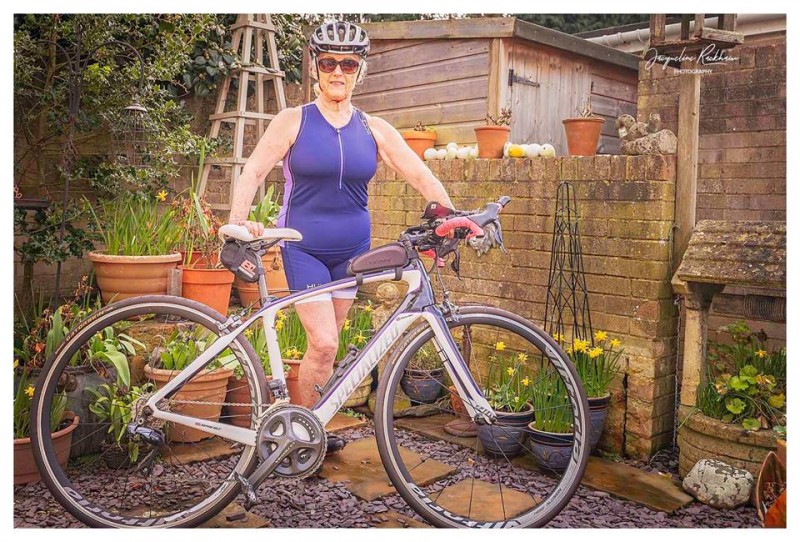 Triathletes now are obsessed with their equipment and marginal gains. How does your current wetsuit and bike compare to when you first started?

When I first started I had a second-hand bike and a borrowed sleeveless wetsuit.

What did you use to fuel up before sports specific products like gels and bars became the norm?

I tried everything that was on offer and listened to advise since I knew nothing about sports nutrition. I think you really have to find out for yourself what suits you. These days I never eat before a race.

I train six days a week. What does your typical training week look like and how has it changed as you've got older?

I swim four times a week and run two short runs plus a long run of around 10km at the weekend. During the winter I am on the turbo trainer a few times a week but I like to ride outdoors as the weather gets better. When we started would ride 100 miles outdoors every weekend no matter what the weather so that is a change!

Nowadays, I do not go out in the rain or cold deliberately. That would be daft at my age. These days if I lose a session for whatever reason life has thrown, I move forward and do not try to catch up or fit in the lost session. I don't worry about the odd missed training day.

However, injuries are very annoying and constantly testing them is fatal. Let yourself mend. Last year, exactly a year ago, in fact, I fell off my bike and broke my hand and wrist. These things happen to everybody and it is hard to keep your head on straight. 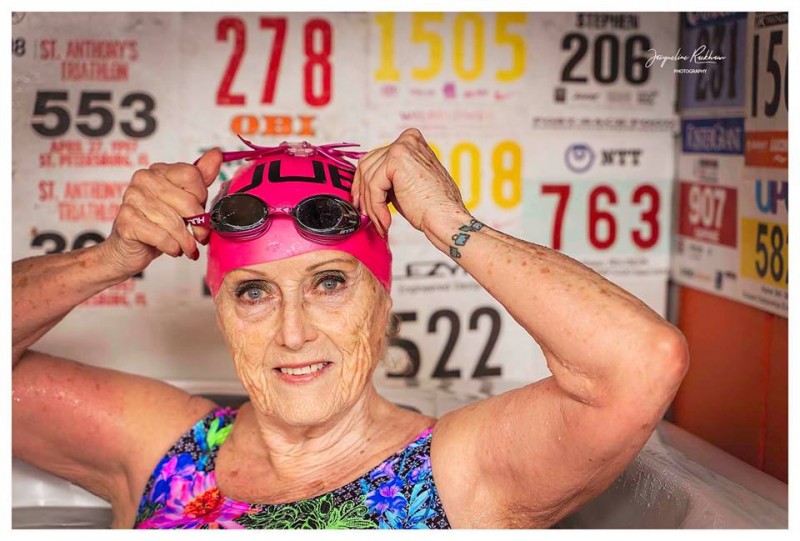 What’s your favourite race you've ever competed in?

I have raced all over the world but I will always remember the incredible time I had at the World Long distance Championships in Japan. Only five GB women were on the team and two of us brought back a gold medal. The race was on Sado Island which was like a step back in time. We stayed in a Ryokan hotel which was a marvellous experience with traditional kimonos, slippers and paper walls. I have raced in the Ironman World Championships in Kona Hawaii three times that takes a bit of beating too.

If you could give one piece of advice to the younger generation of triathletes, what would it be?

To remember that you are doing the sport for yourself. To test yourself. See what you have inside you. Your rules. Work as hard as you can. Listen to advice but keep your own aims in mind.

Triathlon is the most tremendous fun but it's not easy. Work on improving your weaknesses. Have fun. Be nice. Help others as you progress. 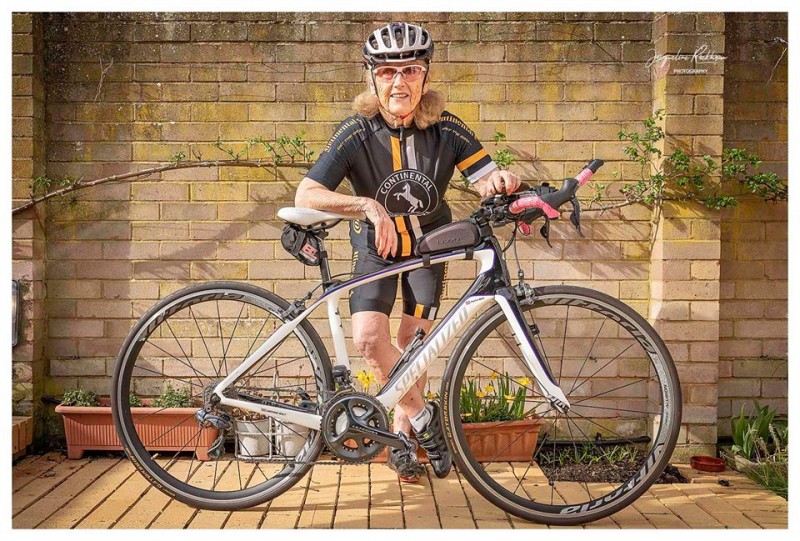 What drew you into racing for the GB Age Group Team?

I qualified for the ITU World Championships in Muskoka, Canada in my very first triathlon with an open water swim. That was at Swindon. I was the only one in the 50-55 year age group which gave me a team GB slot.

I had only done one other triathlon at Ringwood which was an 800m pool swim plus standard distance bike and run. My only other experience was a swim-run race. Swindon was my third race ever and my first at Olympic distance.

What would be your dream location to race in?

Ever since we started triathlon, my husband has also been my coach and we have not been on a single holiday that hasn't involved a race. Combining our love of the sport with travel, we have really chosen our dream locations from the start.

Our first Ironman was Lanzarote which is a lovely location. We have raced Nice about four or five times, equally lovely. Ironman Austria is a wonderful event with the cleanest crystal clear water and amazing scenery. I've raced there four times but Steve has done Ironman Austria seven or eight times which says a lot.

We have done a lot of races in the USA. Wildflower, Vineman, Gulf Coast, Florida, Memphis in May, Lake Placid. Hawaii must be the main dream for most people though surely. 90-foot deep tropical water, no wetsuits, lava fields, humid sweaty conditions, the big climb to Hawi, the wind, the crowd support on Allii drive all the way to the famous banyan tree at the end.

All photos by Jacqueline Rackham Photography

Posted in Triathlon and tagged Triathlon, you can, get there, IWD, swim, bike, run, cycling, running, swimming, open-water swimming