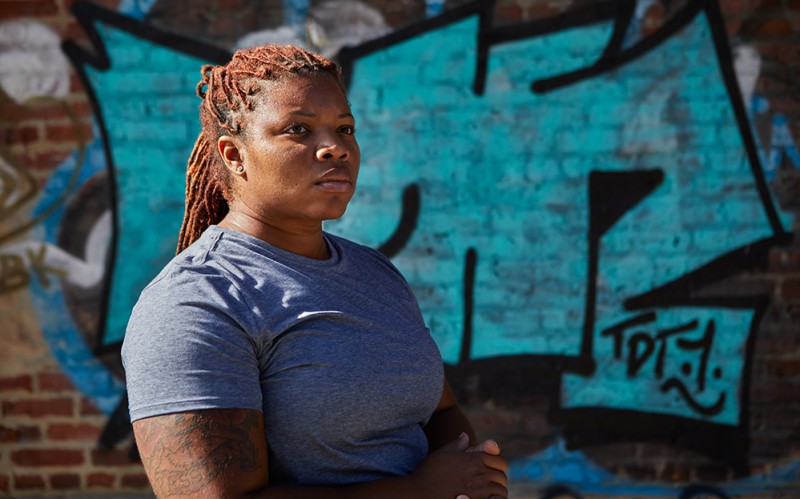 Meet Latoya. Latoya is 32 and runs anywhere between 25 and 60 miles a week. She’s run more than 80 races, including two ultramarathons, and has a room full of race-finisher medals.

Latoya is also a plus-sized runner – or as she would say on her food and running blog Running Fat Chef: 'I’m fit. I’m fat. I’m an athlete.'

It was Latoya’s weight that led her to take up running in the first place. Back in 2012, Latoya weighed over 120kg. The New Yorker was diagnosed with 'a laundry list' of health problems relating to her weight, which included sciatica, a herniated disc, and sharp headaches. The advice from her doctor was critical: 'You have to lose this weight or you’re going to die.'

Starting out with workouts and callisthenics, it was after an encounter at her local track in late 2013 when the idea of running first took hold.

'I kept seeing this guy with headphones dancing on the track, jogging around and sometimes going backwards,' recalls Latoya. 'I wanted his happiness. He didn’t care if people were looking at him. I think that was the bug that put it in my head.'

When an old friend posted on Facebook that he was signing up for a half marathon, Latoya decided to sign up too – but she wasn’t without her doubts.

'I hit the button and then I freaked out a little as I’d never even run a mile, let alone a half marathon!'

She had no shoes or running kit but tackled the challenge head-on. She went back to the track and quickly joined a 'sisterhood' of 'super-friendly' runners from the Black Girls Run group who encouraged Latoya on her personal quest.

A happy back-of-the-pack runner, Latoya ticked the half marathon off and soon went up to the full marathon distance. She has since competed in two ultramarathons.

Running has completely changed her as a person. She realised she was able to do anything but also that this was about more than the weight loss. She took on other challenges she’d never have contemplated before, including skydiving.

But it hasn’t all been positive. She’s been heckled at races and repeatedly trolled online for her plus-sized body. Latoya reminds herself that very few of these trolls have likely run an ultramarathon. Instead, she focuses on the many messages she gets saying how inspiring it is to hear her story and see her body-positive pictures online.

'I’m not trying to be this poster girl,' she says. 'You can do anything here and running might not be for everyone, but for me, it was like my gateway drug. I had a metamorphosis and suddenly I was doing things I’d have never considered before. Running changed everything for me.'

HOKA ONE ONE are proud to support Latoya as her running shoe sponsor.

Shop HOKA ONE ONE at Wiggle

Posted in Run and tagged run, running, Marathon, ultra marathon, get there, IWD
Thinking of getting into road cycling?
How to find the bike for you
717,920 Fans
32,494 Subscribers
75,504 Followers
14,703 Subscribers