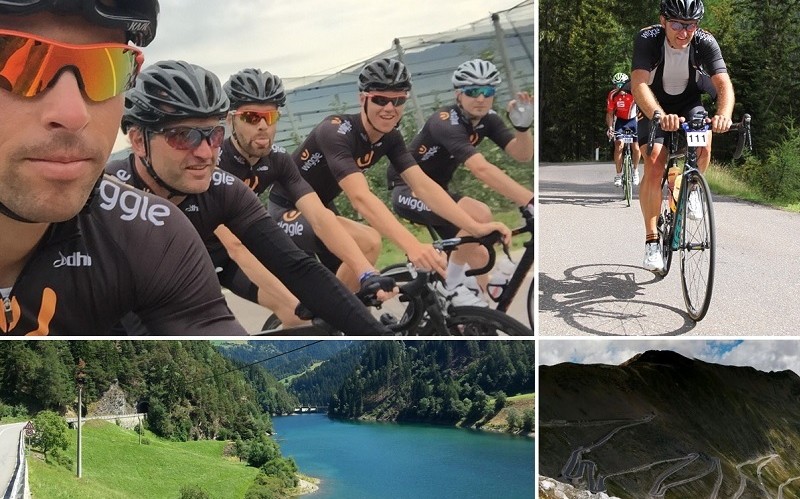 The Giro delle Dolomiti is a mass sportive cycling event centered in the heart of the South Tyrol province of Italy, with stages starting and ending in the region’s central town, Bolzano. The event is spread over seven days and includes six stages, which venture into the stunning Dolomites and Alto Adige. 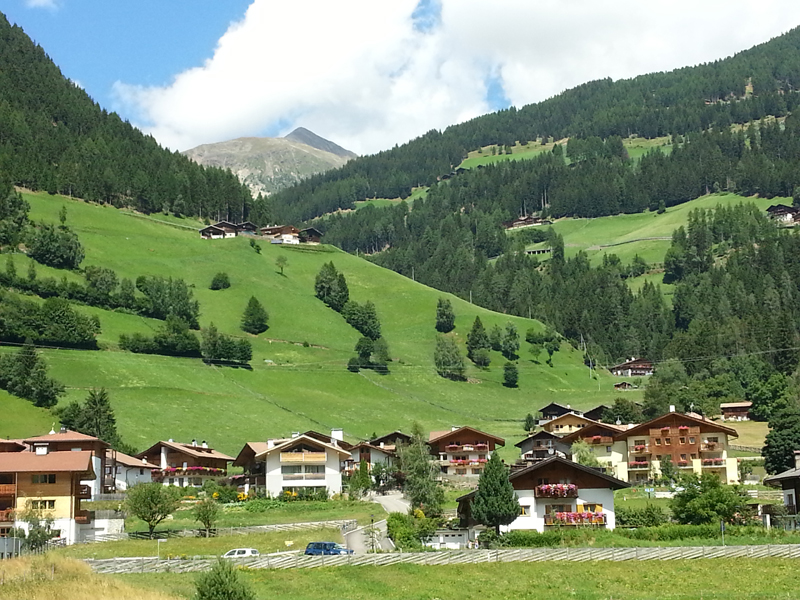 Within each stage there is a timed section, which provides the competitive side to the event. Riders can compete with each other for prizes in various categories (GC, Women, Junior, and age groups). This leads to a great competitive spirit within the 500 strong peloton, and a chance to meet new people.

For the first time, Team Wiggle, with the help and assistance of the South Tyrol Tourist board, sent over a five man team (Tim Wiggins, Ben Simmons, Andy Shackel, Richard Pearman and Ed Tibbitts) to compete in this event with the aim of all finishing and riding well.

None of us had ever ridden in the Dolomites before, so we were not too sure what to expect! Yes, we expected plenty of climbing, but to what degree we were not sure; but with open minds and up for the challenge ahead, we travelled to Italy. At the very least, we wanted to #getround!

Our story begins early Saturday (25th July) morning. In short, it was: up early, bike and kit packed into my Scicon AeroComfort 2.0 TSA Bike Bag, and Ed picked me up to meet the others outside the Wiggle offices. Then it was a taxi to Gatwick, flight to Munich, and a transfer to Bolzano and to our hotel (Hotel Gantkofel) in Adriana. A swift unpack, then a ride to Bolzano to sign on. Back to hotel; dinner, sleep.

The opening stage didn’t start to well for Team Wiggle. We all thought the stage started at 8am, but upon arrival the 500 strong peloton had left – at 7.30am. Ooops! A few people in yellow t-shirts (support crew) were still around though, and very helpful. After a few phones calls, a support vehicle appeared with the instruction given to us to follow it. So in true ‘pro’ style the 5 of us tucked in behind a van and tailgated it for about 18km @40-50kph joining the peloton 30 minutes later. No harm done!

The timed section took us up a real stinker of a climb (Colle Schneiderwiesen) and I was cooked about 2km’s into it. The hard pace prior took its toll. The climb was long, steep, and narrow; but the views were awesome. Once at the top, time for regrouping and some food and drink before the controlled descent down and back into Bolzano.

Note – each stage is controlled: with this I mean the whole field has to follow the lead car at all times. This is not the case when the timed section starts as the car pulls away and riders race this section with each other for position. Once this section has finished (usually at the top of a climb), it’s back to following the lead car back to Bolzano.

Arriving on time – (ha ha ha!) we set off at a controlled and easy pace. Today’s ride was a hilly one, climbing virtually from the start up the Passo Nigra. The pace was steady for the first 40km before regrouping at the top and taking on refreshments. The km’s racked up and so did the climbing. Heading into the Dolomites, the scenery was stunning. Meeting new people along the way and having fun with the team, the time passed pretty quickly. Soon though the timed section was upon us and OMG, this climb was brutal. Such an insanely steep hill that went on and on for ages. So tough, even 'Simo' and Shackel were on their knees (making friends with their 25) finding the gradient tough. The end couldn’t come soon enough for me as I was crawling up this steep climb during the last few K’s.  Tim rode strongly, but like Ben and Shackel, I found it hard going.

This was the longest stage and it took us over 3 climbs (Passo Sella, Passo Pordoi, and Passo Campolongo) – mountains with the classic Dolomites features (jagged rock formations and deep valleys). 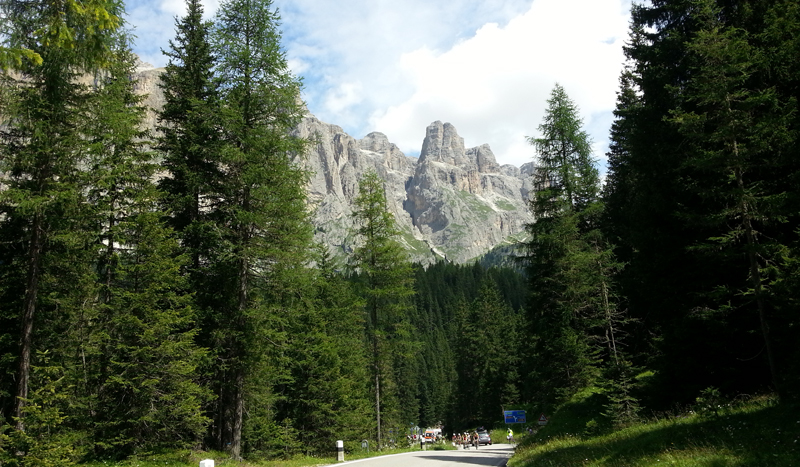 This turned out to be the best day for me, cycling wise, as everything went well. I felt reasonably strong, comfortable, and happy. During the ride the Team did some race interviews that can be viewed below.

The final climb (Passo Gardena) was hard mind you and I did struggle with this, as did the others, as it was steep!! Still, the day was a good one and the ride back was fast due to the extended long descent back to Bolzano and then followed by a TT effort from Ben, Andy, Tim and myself to get back onto the peloton after stopping to admire some views on the descent.

Stelvio day. From Bolzano it was a transfer by coach to the village of Prato Allo Stelvio before the stage started. The climb of the Stelvio was on my bucket list of climbs to ascend so I was chuffed to knock this one off it. Trouble was, I had a stinking cold by this point and my body and mind were not up for the immense challenge that lay ahead of me. 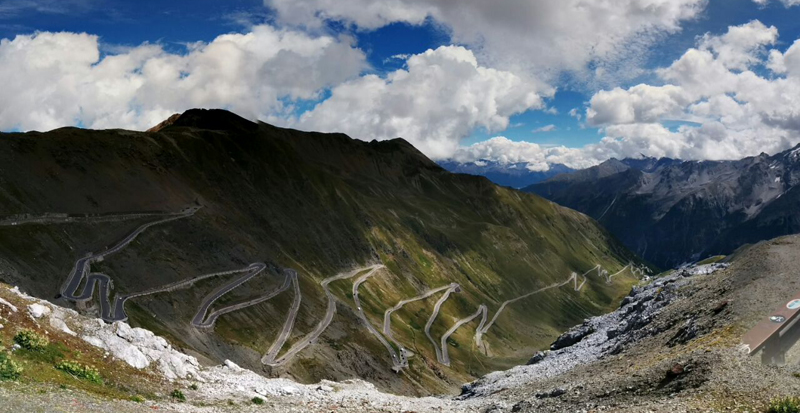 Lined up on the start line I realised that I had also punctured my front wheel. I did get a replacement, but it wasn’t the start I was looking for, and once on the climb I started getting dropped off, and was not holding the pace or wheels in front of me very well. Pretty pissed off, but still I was here to ride the bike so I just got on with it enjoying the riding as best I could. 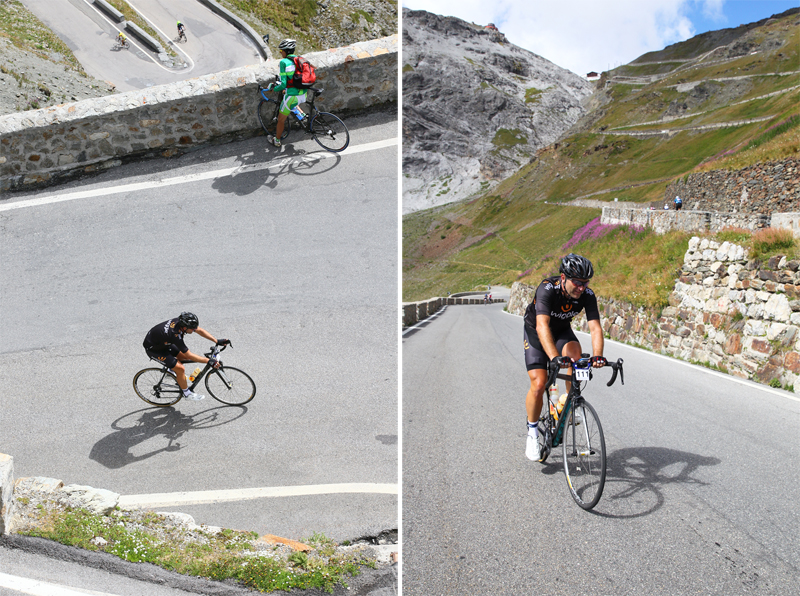 By the time I arrived at the final set of hairpins, I was totally wasted and had nothing left in the tank. All I could do was to grind up forcing the pedals round. I even had to stop at one point to put on a gilet as I was getting cold. Once at the top I met up with Ed and we descended down to the valley in Switzerland before crossing back into Italy and into Prato Allo Stelvio for lunch – then the transfer back to Bolzano. A truly awesome day, but having a cold put the dampers on it. I will return. 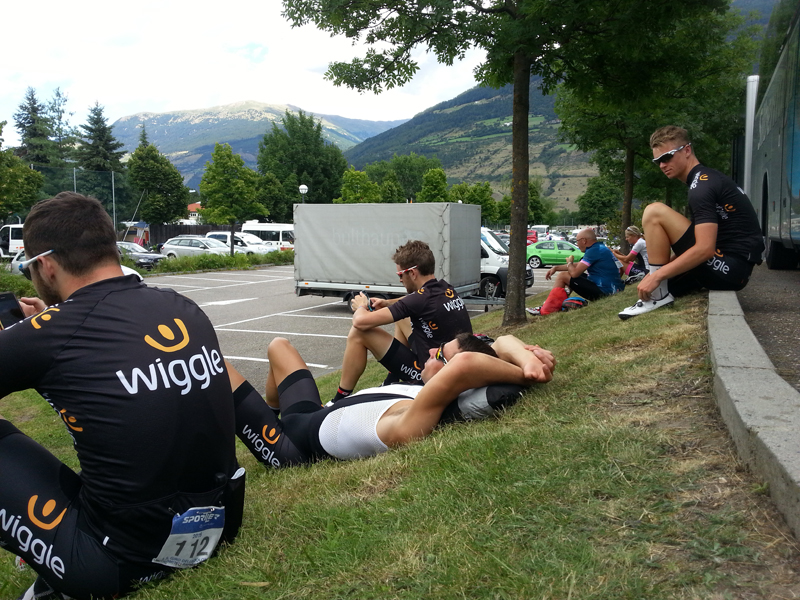 Stage five took us from Bolzano and up the Passo Castrin to Fontana Bianca. At the top of the gradual/steep climb, which originates 35km away in the town of Lana, is a lovely lake which is surrounded by a lush green pine forest and ideal for walkers. 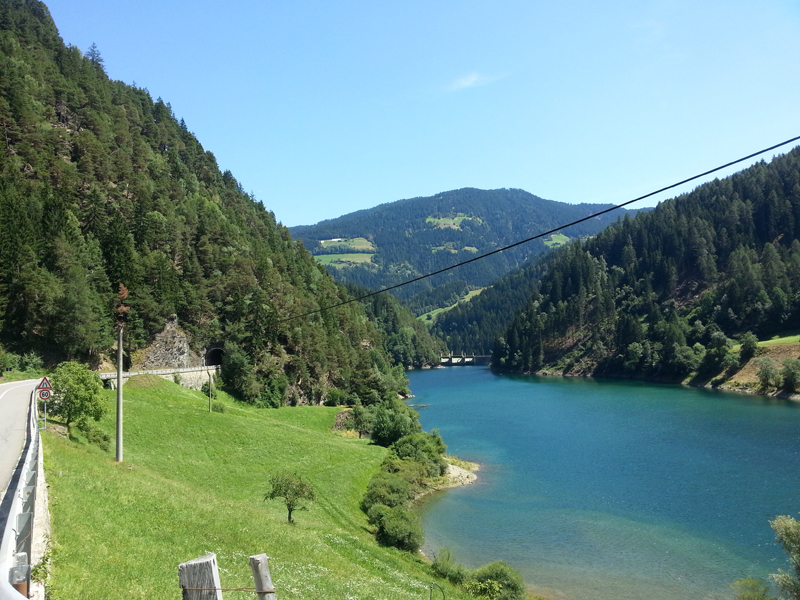 The last 5km got steep, but the scenery this whole climb passes by is amazing. On the way back down, I stopped off at various points to take some photos. The final stage and still suffering with my cold, I took in the scenery as we rode through a valley for the last time. Like many other stages before, the route went through the valleys that then opened up to the town of Bolzano. 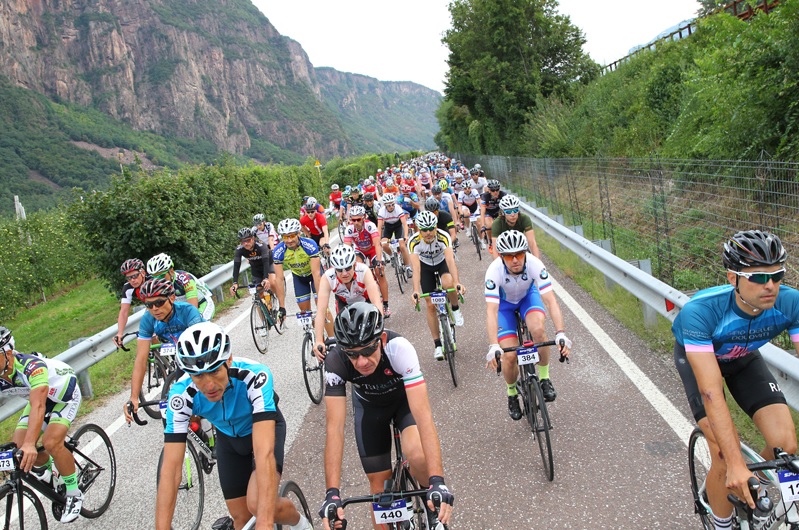 Off the valleys are long and steep climbs and shortly into this stage we hit one. This time it was a short 1.5km climb (Passo Laimburg), but it is well known locally for its steepness and aggressive slopes. It lives up to its reputation, that’s for sure, and as the 490 strong peloton took on the lower slopes, it split into groups very quickly. The faster guys were battling it out up front, whilst the rest of us just got up it.

Once you crest the top, it’s a sharp descent down and then an easy ride to the refreshment stop at Mezzocorona. When we arrived, a group of us took ourselves to a café and waited for the peloton to go past. When this happened we jumped on and remained within the group until we arrived back at Bolzano for the prize presentation. 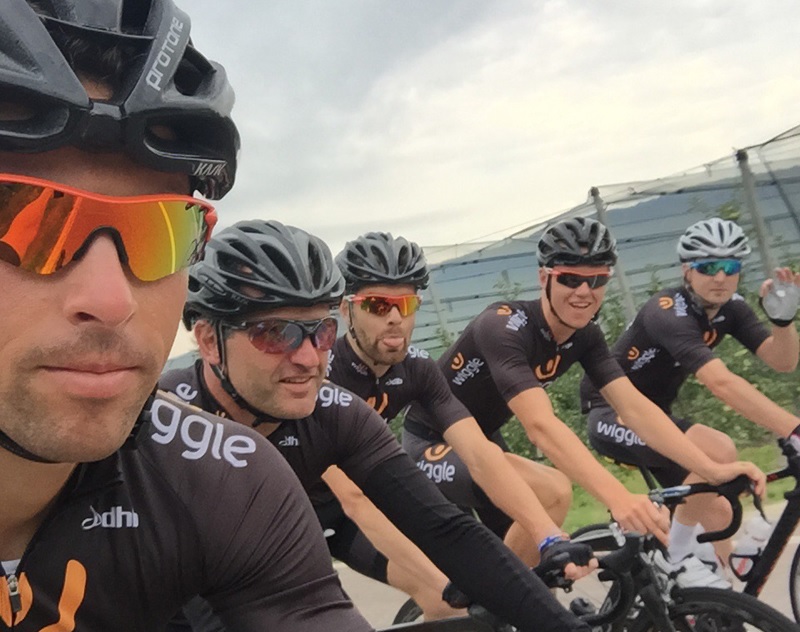 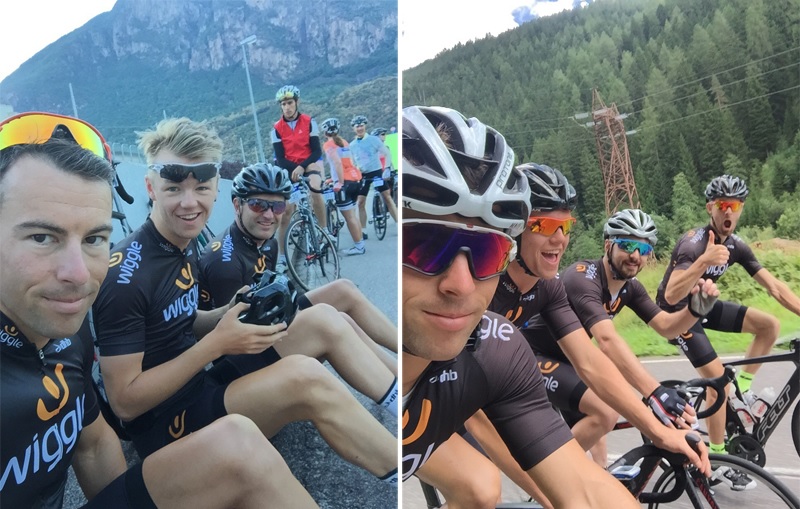 Riding with the team was so much fun and reminded me of the days when I used to take teams over to Ireland for the Ras. You get to learn a lot about your fellow team mates as the days go by and what makes them tick, etc.

The best day for me was the Stage 3. Everything felt good, the weather was perfect, the legs felt reasonable, and the scenery was just amazing. It was a great day to be on the bike riding with the group and enjoying the stunning mountain passes and valleys. 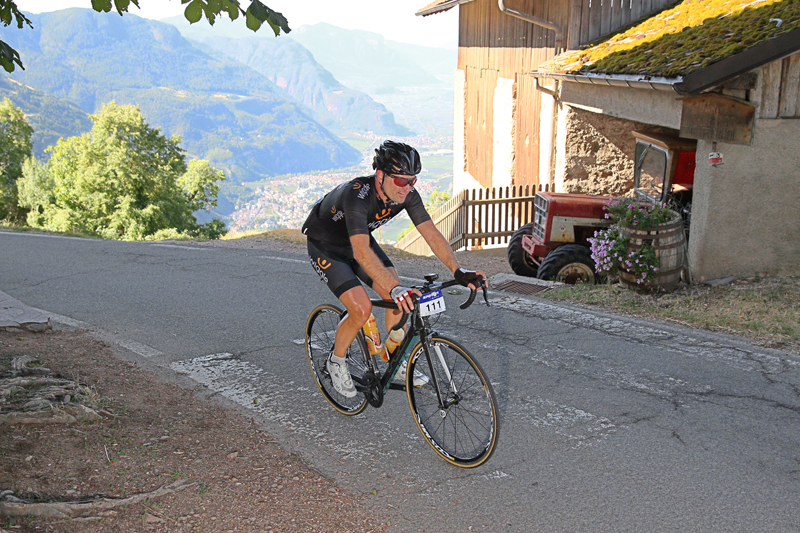 The worst day for me, was probably stage 4. Climbing the Legendary Stelvio was a slog and I didn’t enjoy it so much. The cold I had caught overnight now taking over my body and in full swing. Everything was slow, hard, and painful. I felt pretty rubbish once at the top so I was glad to be back on the descent with base not too far away.

The event is super well run and organised. Food at the lunches was good and plentiful, the routes were amazing, the people friendly, and the support crew (motorbike marshals, etc) really made us feel safe. A few accidents did happen, but if honest this is to be expected when cycling in such a large group. The pace behind the lead car was a bit slow at times and could have been faster I think, but it controls the riders and gives better protection for everybody. I’m guessing it’s better to have 500 riders together in one one-mile peloton rather than spread over 40-50 miles. 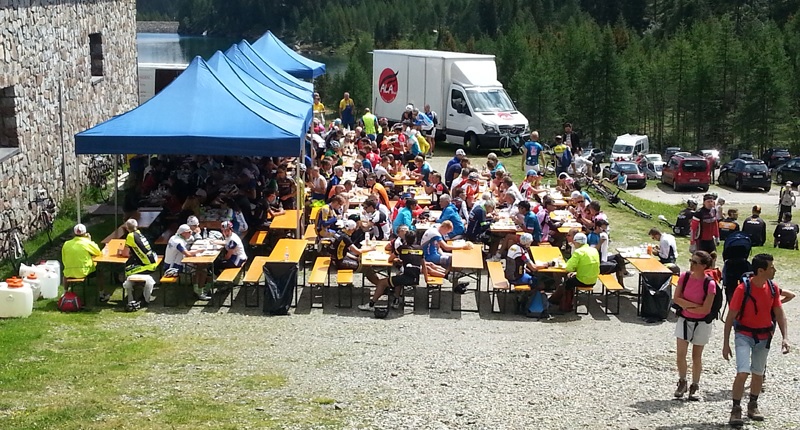 Final thanks and recommendations

Overall, this adventure was just amazing. I can’t thank the South Tyrol region enough for allowing me (and the team) the pleasure in taking part in the Giro Delle Dolomiti and to enjoy the stunning and beautiful surroundings we cycled through. Riding the Dolomites was hard, but so worth it. Once up in the mountains the rock formations are so impressive, the deep valleys so admiring, and the scenery just stunning. I can see why this area is a UNESCO World Heritage site! 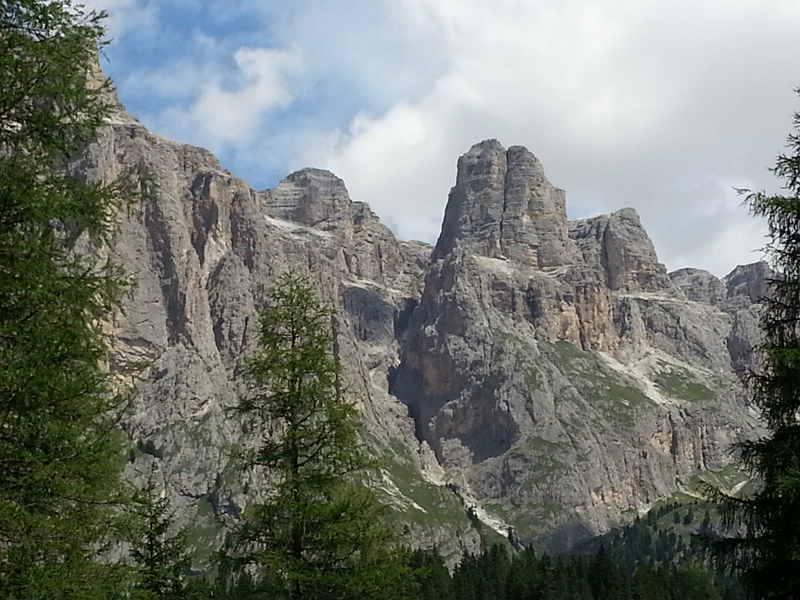 Also, a big thanks to the staff at Hotel Gantkofel for accommodating us so perfectly, and making our stay trouble free. They were very helpful and it was also bike friendly, and a place I will return to in the future.

If you want to visit the South Tyrol region, I would highly recommend our hotel in Adriana. I’d recommend the town of Merano, which has great café’s and excellent shopping outlets. Finally I would recommend the region’s capital Bolzano; on our rest day Ed and I visited the centre via train; it was superb.

Richard Pearman is an avid cyclist who has been cycling and racing since he left school. Now in his mid forties, he still has a love, and passion for cycling and being involved in all aspects of training, racing (for Team Wiggle).