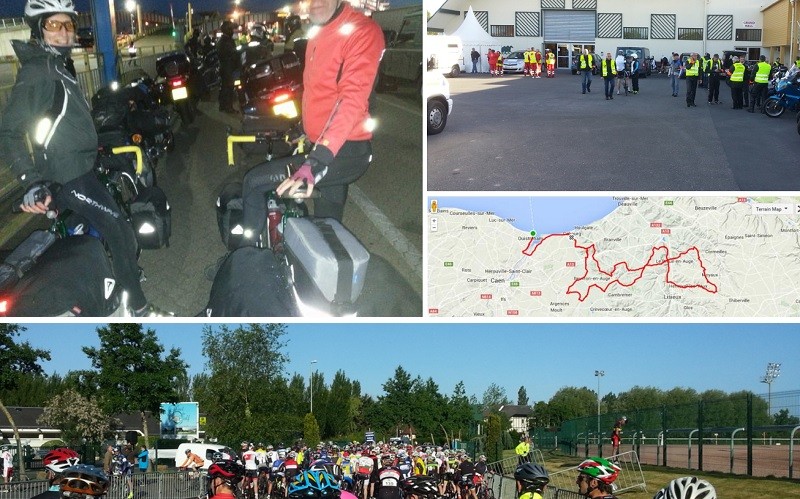 As part of my training program, I decided to ride an event in France known as La Fleche Normande. It’s a sportive ride, but with a difference. But first before I tell you why it’s different, let me quickly explain the lead up to race day.

Catching the overnight ferry from Portsmouth, bound for Quistreham, I casually bump into two riders also catching the same ferry. Heavily supplied, they tell me about their pending trip the other side of the water and all about the villages they plan to stay at. Not sure I can ride a bike that weighs the same as a tank, but fair play to them for doing what they are about to do. Anyhow, after a short wait we boared the ferry, park the bikes up and then go our separate ways. 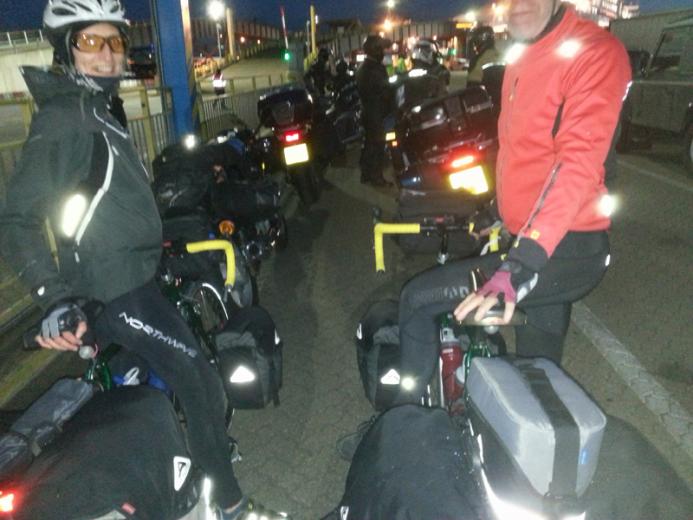 After a ‘sort-of’ comfortable sleep, I awake at 6:15 and promptly get sorted out ready to disembark the ferry. As prescribed, the weather was clear even though a slight chill was in the air. I descend the ramp, cycle to passport control, then start the 12 mile ride to the village of Cabourg.

Cabourg is the start of La Fleche Normande and also sits on the coast having beautiful beaches at its shores. A quiet and pleasant village/town, I cycle into its boundaries after a 50 minute easy ride. Finding the Hippodrome (HQ) I collect my race number, drop off my rucksack – a relief at this point, and sort my bike out sticking the usual front number plate to my bars also pinning a number to my jersey. In the car park I’m greeted by a number of motorcycle marshals & straightaway impressed with this as there are plenty of them. Also first aid are here and a number of cars with lights on too.

The start of this event is a pretty laid back affair as riders casually ride into the area then placed into one of three smaller areas according to the number you have. After a 10 minute wait, an announcer speaks over the speaker system, in French of course – had no idea what he was saying, then the groups are then allowed to squeeze up to each other all cosy like. 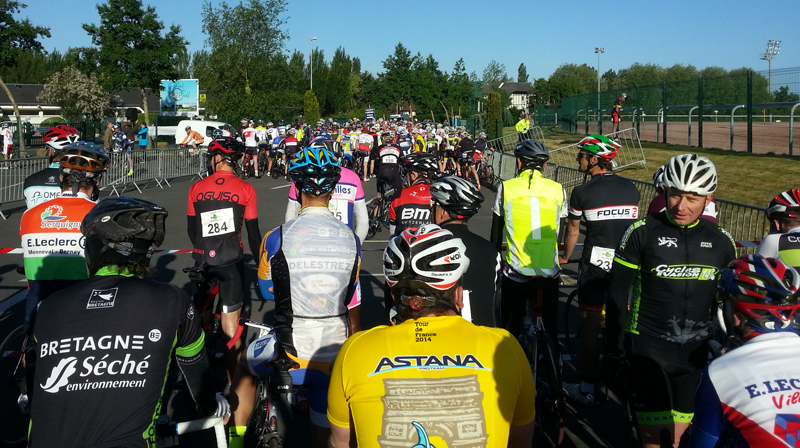 Riders get ready. They know what awaits them. I don’t!!

We leave the area and through some gates then onto the French roads and blimey, what a fast start. Straight away we are racing to catch up with the front lot who are smashing it up large. Have to say was not expecting this as a starting pace. Within minutes I have told myself this is going to be a fast day in the saddle. I have my Shimano camera mounted on my bars and decided to record the start. Take a look and see what I mean. It shows the start and the fact that the riders are allowed on both sides of the roads with the French police stopping traffic at the junctions. This was later to be the case throughout my 95 mile chase in Normandy. Totally different way of thinking over here to back home. I’m well impressed with this.

The first climb takes plenty of casualties and because of a crash, which I get round, breaks the group. From here on, it’s just full on and nobody stops at all not even at the very small feed zones (actually locals with homemade food etc – no Brands like High5, Powerbar etc – just the odd French delicacy or two. Soon 30 miles, 40 miles 50 miles then 60 miles are covered and at such a high pace & still no one wants to stop.

Another video showing the group I am with going straight over main crossroads with Police stopping traffic for us – cyclists.

70 miles clocks up on my Garmin 500 and the pace is still rapid. 80 miles fly’s by and then I recognise a village called Doluze. We came down a nasty climb and yep we are going to go up it. The group hits the climb at full pace and splinters straightaway. I see the strongest riders take off and I’m in hot pursuit catching two nearing the top. The other escapes, but after a frantic chase the other side I catch him. He speaks something to me in French, but we work our socks off together keeping our gap from the chasing riders behind. Its 2 against 15 for the last 6kms. We are left out there until 500 metres to go when they swarm around like flies and then they start the sprint – Cav style. Nothing held back - this is a serious sprint. My legs are cooked so sit up and let them go.

The Ride Back to the Ferry

I covered the 95 miles in 4:26:07 averaging 21 mph, but below is the total route from ferry to Cabourg and including the race route. You can see my ride performance on Strava. 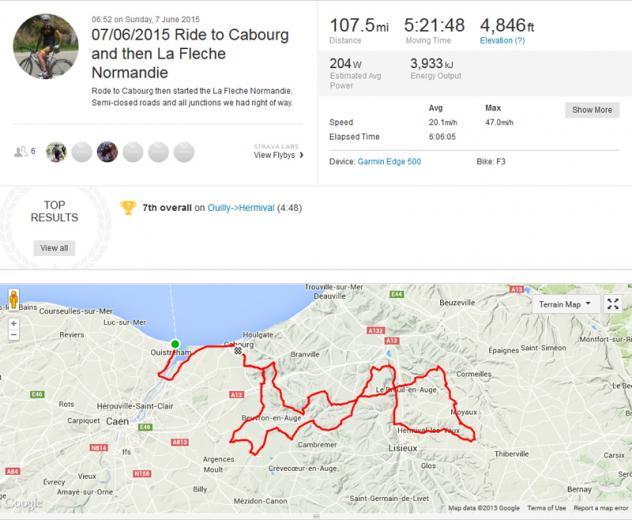 A flipping fast, aggressive non-stop smash up in the Normandy lanes. Absolutely loved every second of this event. Not for the fainted hearted mind you, but so enjoyable. Get this, the winners time was 3:55:49 averaging over 23mph. Oh yeah, because I was the only brit who rode, I won a prize too. Couldn’t pick it up though as I had to catch the ferry back home and my rucksack was already full.

Richard Pearman is an avid cyclist who has been cycling and racing since he left school. Now in his mid forties, he still has a love, and passion for cycling and being involved in all aspects of training, racing (for Team Wiggle).