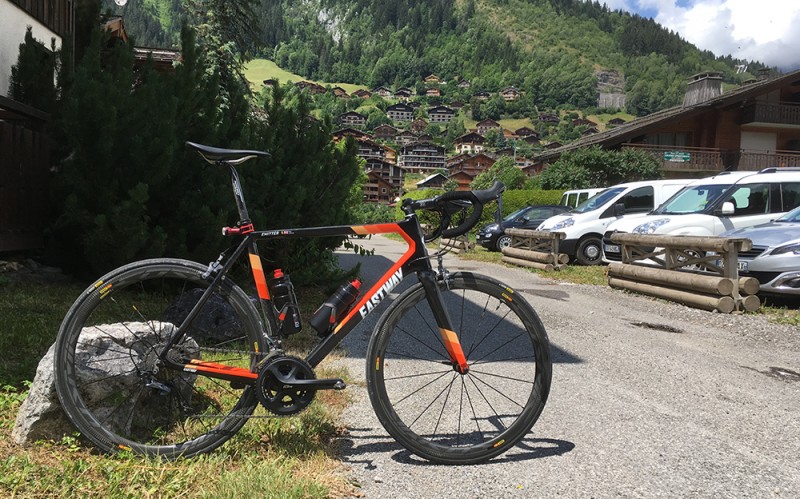 Picture the scene. It’s late May. You’ve let the horribly long winter get the better of your riding time and when an unseasonably nice weather spell arrives, you spend it on the beach with your kids and barbecuing as opposed to riding. Then you get a call from the lovely folk at Mavic.

I'd been invited to Annecy to see their 2019 Spring/Summer collection in early July, just before the annual Étape du Tour. Awesome! If I stuck around an extra day it would be a great opportunity to pre-ride the course.  Just over a month to prepare would be enough right?

This may go down as one of my worst spur of the moment decisions. 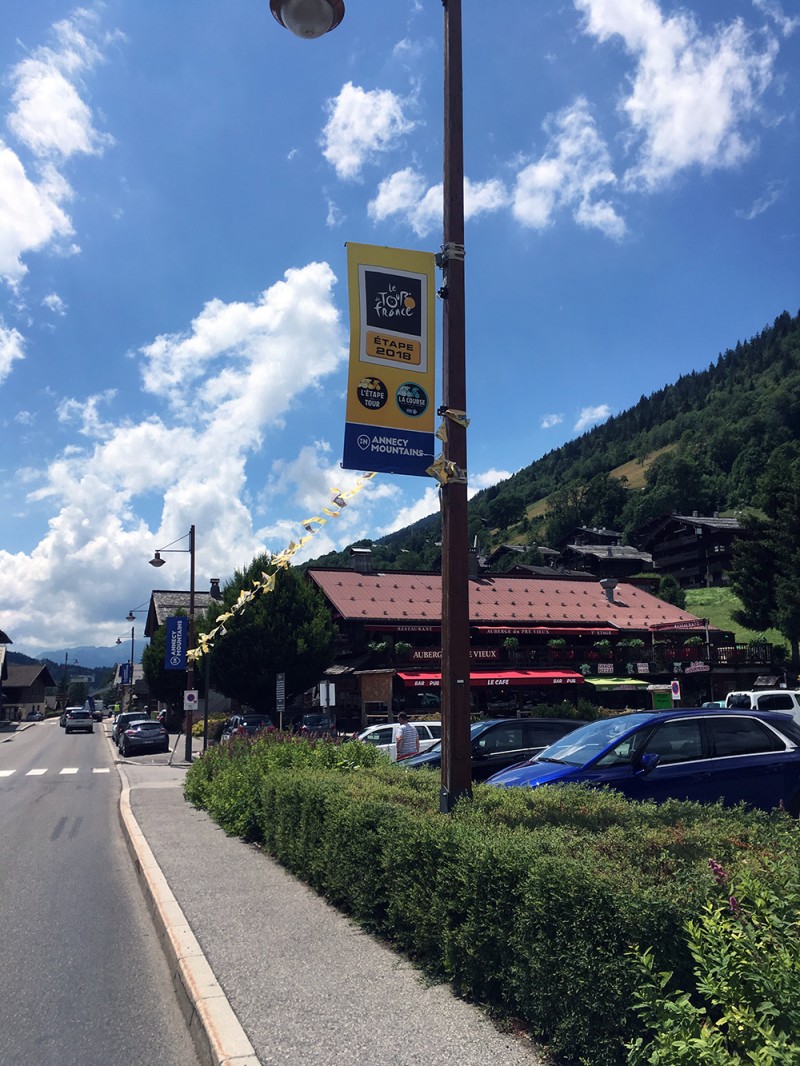 A couple of weeks pass by as we finalise plans and confirm. Rather than use this time to start training ‘just in case,’ I continue to assume all will be good.

The Étape du Tour is a sportive in the grandest scale. Each year one of the most challenging stages of the Tour de France is selected to be ridden by 15,000 amateur cyclists. The whole experience is the closest us mortals can get to actually riding in the tour. Having ridden in two previous versions officially, I should be very aware of how important training before the event is!

Looking at my year-to-date stats it was alarming to see that I was on track for my third-lowest total milage in the ten years since my records began. Intentionally or otherwise I'd also avoided any road that included any elevation. I told myself I’d be extra-fresh. 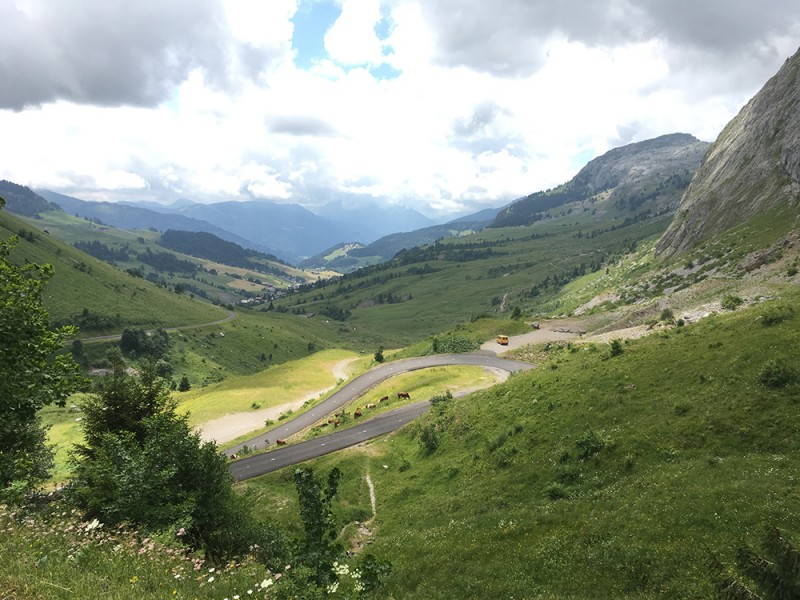 I’d prepared for the Etape with varying training techniques previously. The first time I rode it I had a late entry but I’d been riding lots that year already. I spent every lunch break for 8 weeks doing an assault on a local climb and fit in a long weekend ride of at least 60 miles. The next time I was commuting 15 miles each way daily, taking in over 1,500ft of climbing each way too. I did a 40 mile ride a few weeks before the event, but decided I was probably in good enough shape as I had a good base fitness. Both years I struggled! The biggest issues for me are the following: 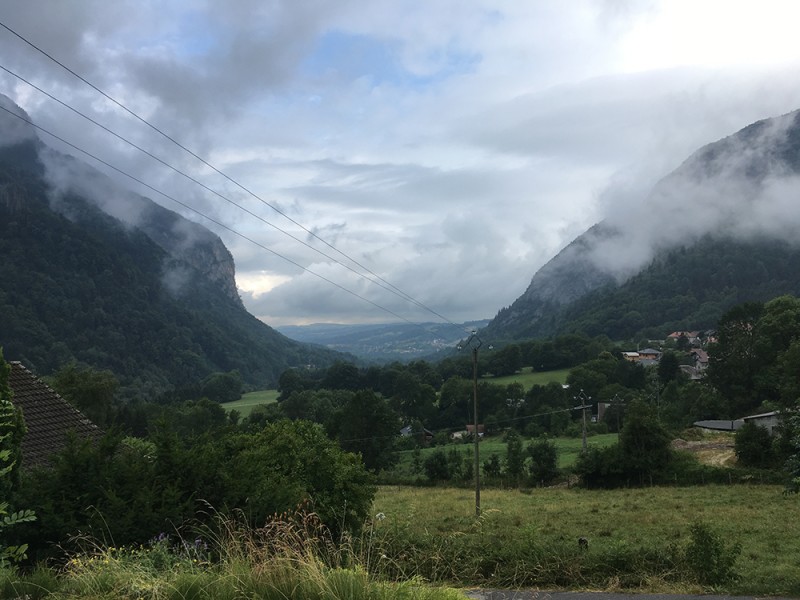 These three factors cannot really be replicated simply in the UK, so why bother trying, right? I actually considered that, but with two and a half weeks to go I pulled on my lycra and started to get the wheels rolling. I’m just riding the route, remember – not the event, so I can take it easy and enjoy… I’m still going to need to do some last minute cramming here.

My training consisted of the following:

Buy upgrades to ride up grades

The delight of being in the Alps and having a whole day to do the ride would hold me in good stead, I figured. My attempt to get in shape for three weeks would help. But I would still need some outside assistance.

Over the last couple of years Shimano has brought larger cassette ranges to its top-end groupsets. By switching to a medium cage rear deraillier I could upgrade my Ultegra rear cassette from 28 teeth to 32 – this was going to help me to spin when the gradients got beyond 10%, and give relief to tired legs in the later miles.

I took one step further and bought a Shimano 105 compact chainset, moving from a 36 to 34 on the front will make the uphill more bearable. Sadly – I was very aware these upgrades were not going to ride up hills for me. I put on a new chain to keep things running smooth and threw some carbon handle bars on.

I wanted to move to a more comfortable range of positions and save some more weight. I knew the 3T Superergo shape worked for me so this made sense, and then the lovely folk at Mavic offered me a demo set of their lightweight Cosmic Carbone UST wheels to try. Super-lightweight and tubeless was going to make life easy! I’m starting to believe I can do this. 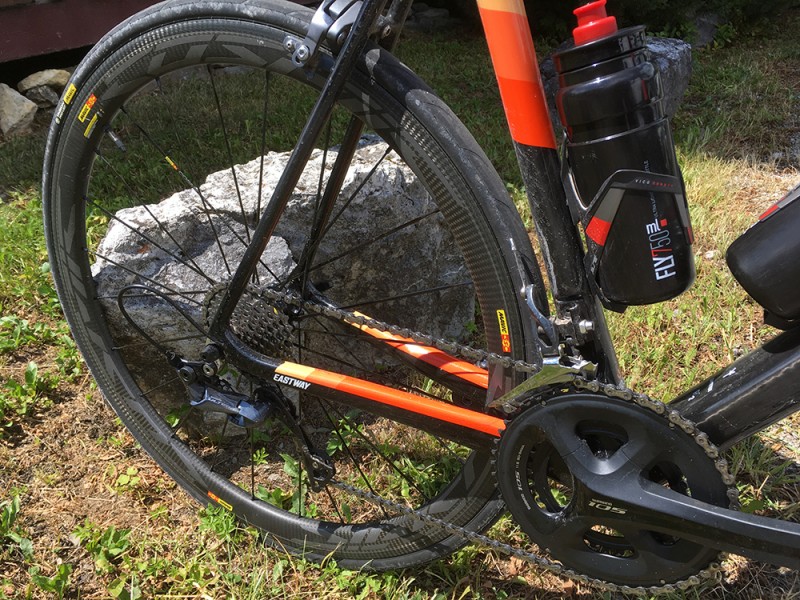 Was my preparation enough?

On the morning of the ride I set my alarm for 4am so I could eat a hearty breakfast and get on the road for sun rise. The weather was forecast to be thunderstorms all day so I grabbed a Shakedry jacket and hoped for the best as I headed to the start line.

The Étape/Tour start village was in full construction mode even at this hour. I decided rolling out from the Mavic tent felt appropriate. It was at this stage that I realised 2 things. 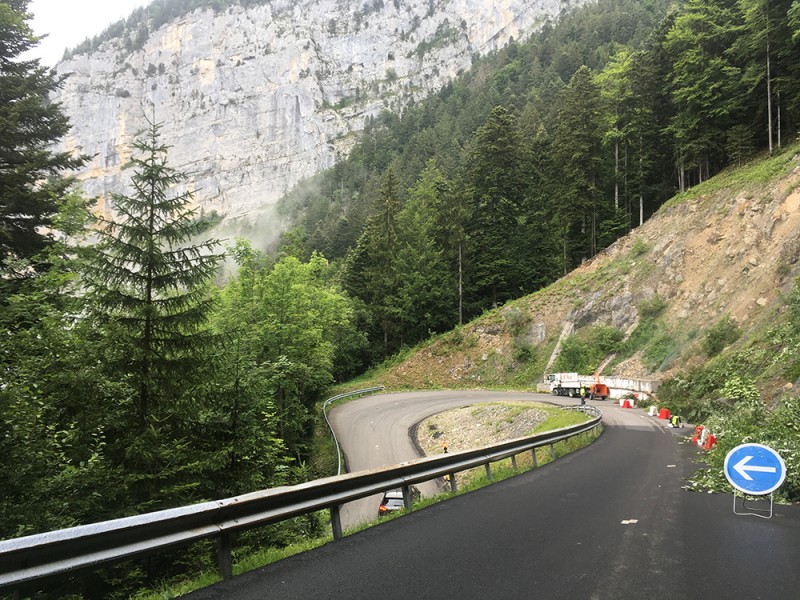 The next nine hours would result in many stops comparing Google maps and screen grabs to keep me heading in the right direction, and often back onto the route. I think I got about 95% of it right with just a few link road errors. Importantly, I took in all the climbs.

The ride starts with a beautiful near loop of Lake Annecy. With the sun rising, this flat section was a gentle wake-up to get the legs ready for what’s ahead.

The first climb was the Col de la Croix Fry. I actually thought I was still on a road leading to the climb, so when I crested the top and realised I was one climb down it was a nice surprise. Then it was on to the only HC climb, Le Plateau des Glières. 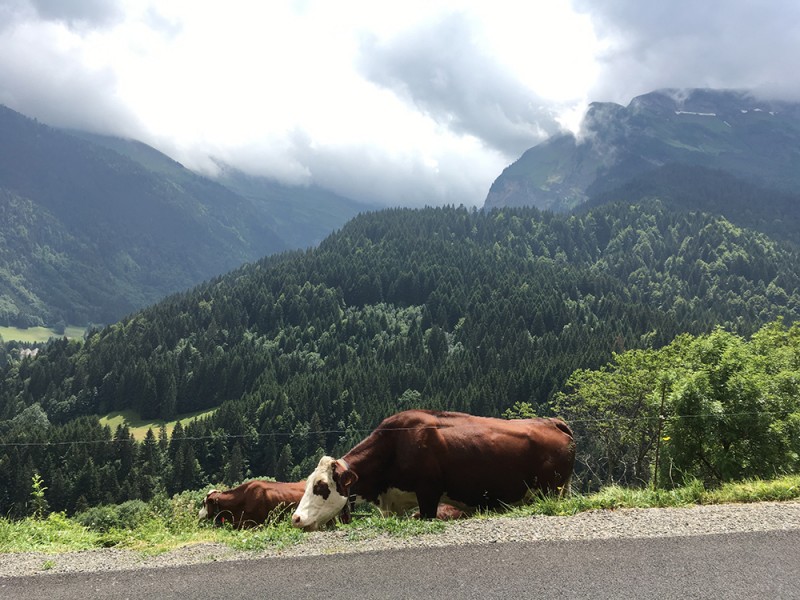 This was more like it! The road is a very small & narrow off-the-beaten-path type. The gradients of each section between switchbacks were really steep at over 11%. Rather than a traditional Alpine climb, each section was much more like a punchy British climb. This felt much more akin to the ‘training climbs’ I’d been doing and within no time I was at the top wondering where the road has gone. Had I taken the wrong route again, only this time up a HC climb?

Ah, the infamous ‘gravel’ section. This is a proper gravel section too. I was at this point very happy that I had tubeless tyres. I had no spares so I was less likely to flat, but the lower tyre pressures I was running made light work of this loose stone section. Although it’s a climb on gravel, I don’t see this being as decisive when the Tour comes up as some may have considered. The stones have been flattened so it’s pretty smooth and fun. 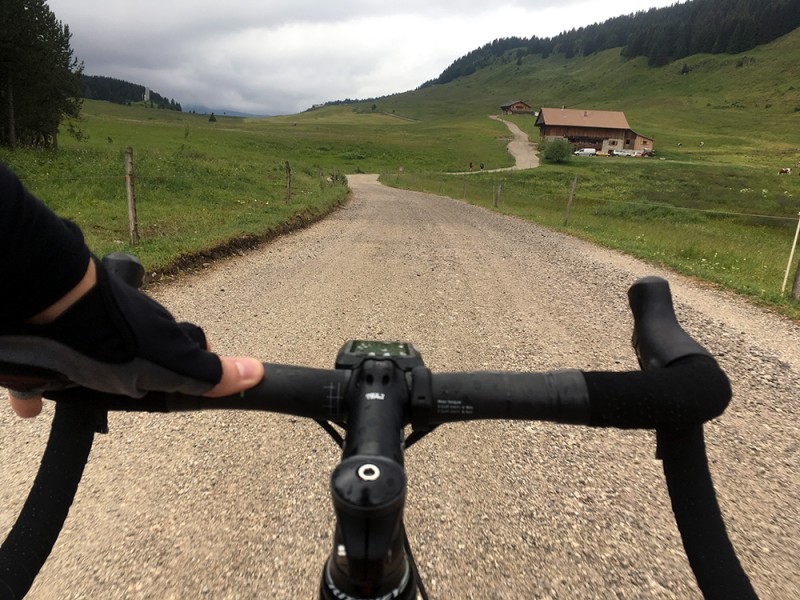 The swooping switchback descent off the back of the climb is so much fun. I’d experienced the tail-end of a storm so the roads were slick from the rain. Most of the route has been re-tarmaced and if it's wet it requires a little more caution, especially when you’re on your own on quiet roads.

From here you take the 'scenic route' to the next climb, avoiding the main roads, so navigating it becomes an issue for me and my lack of route assistance. I discover a 20km drag along a straight main carriage-way that is usually not suitable for bikes. As it’s the only road, I go for it.

The Étape du Tour is a closed roads event so all roads are cycle friendly, but I don’t have this luxury, or other people to sit behind to drag me along and offer some respite. The road abruptly ends and spits you straight into the incredibly steep Col de Romme, a 7km Category One climb. It’s a heads down kind of climb that snakes its way up sections of over 11%. 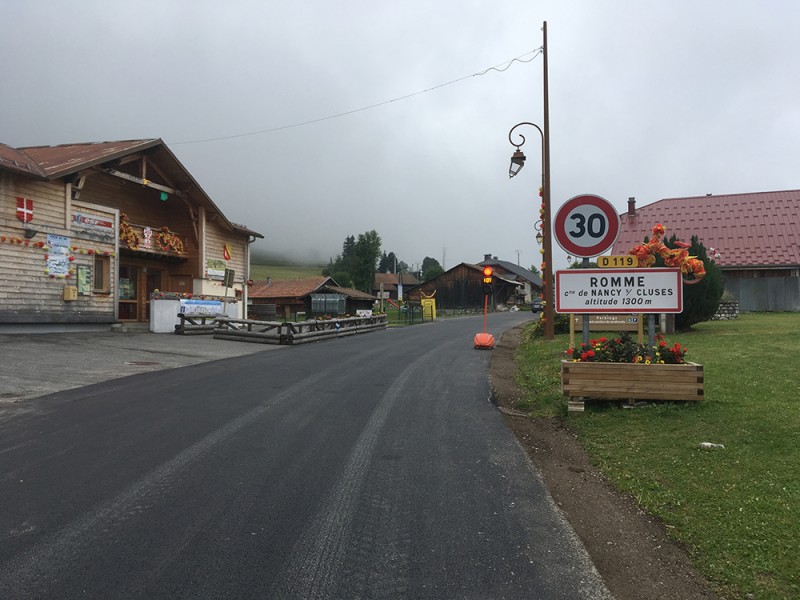 Seeing the 1km to go sign was a strategic place to stop and take a photo, this climb almost broke me! The good news is you get a short break as you cruise into the climb of the Infamous Col de la Colombière. There's  7km to the top with slightly less aggressive average gradients of between 7 and 8%. Nothing too taxing unless you also have over 150km of riding in your legs by this point.

Cresting the Col de la Colombière is a good feeling, it effectively marks the last pedal stroke you need to make as it’s all down from here into Le Grand-Bornand. Of course you’ve worked so hard, this is a beautiful sweeping descent and a chance to seek some thrills, pedal hard and spend whatever you have left. 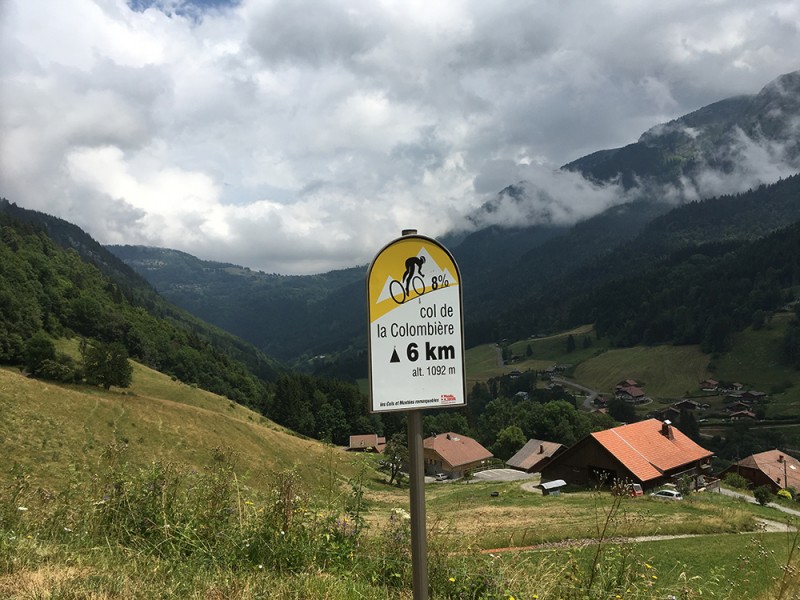 The 2018 Étape du Tour route is suitably tough, but ultimately quite achievable with the right preparation. A few things on the route helped more than I expected. I recently discovered SOS hydration to combat cramp. This is the first proper ride I’ve done where cramp wasn’t a factor due to using in the lead up and during the ride. It was a revelation, also this was the first time I’d ridden road with tubeless tyres. The softer tyre pressure I was able to run completely changed the way my bike felt. It was much less harsh, so much more comfortable and I genuinely felt less fatigued at the end. It’s without doubt the biggest innovation I’ve experienced in road bikes – even bigger than disc brakes. The Mavic UST System was incredible, and will prove to be an expensive test for me as I need them in my life! 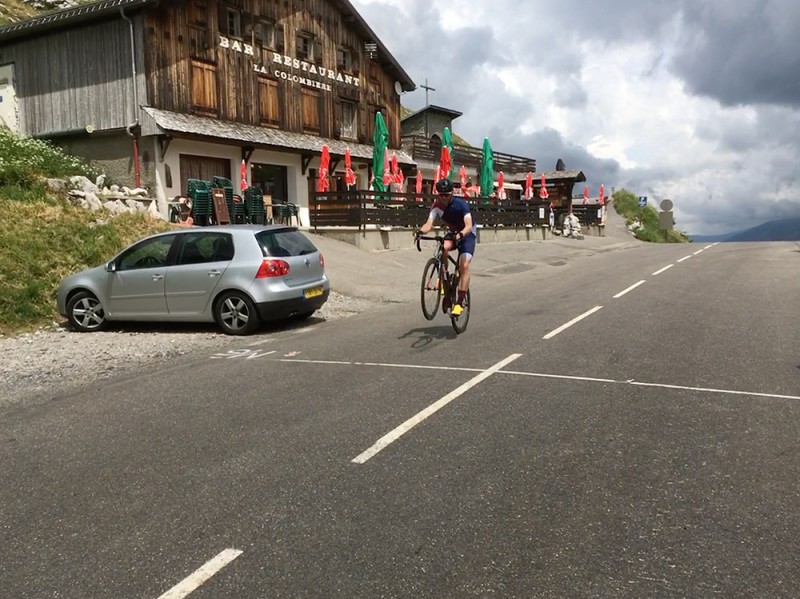 What have I learned

So what did I learn? Respect the mountains to begin with! Before you do any ride that’s a significant step up from what you would usually think is achievable, make sure you begin preparing as early and frequently as possible. Use a home trainer if you have one to help with the longer climb efforts and do at least the same number of miles as the event in the month before the event to let your body know what’s coming.

Take pain killers in your back pocket. The long day in the saddle has potential to bring on shoulder pain, back pain and all kinds of strange niggles. Ibuprofen is a perfect short term fix to keep you rolling, but make sure you address any positional wrongdoings that cause the pain post event to make future rides more enjoyable.

Make sure you stay hydrated, replace electrolytes frequently and have plenty of energy gels and bars to keep you moving. You do not want to bonk in the mountains – keep munching little and often and it will keep you sharp and your engine running. Eat a good breakfast before you ride and drink plenty before you head out too.

Finally - Enjoy it! You’ve hopefully spent a good length of time training for whatever event or ride you’re doing. While you want to do your best time and give it your best shot, make sure you look up and take in the views, chat with the people around you, respect your fellow riders and don’t take things too seriously – remember – it’s absolutely not a race, and you’re not in the Tour! It’s a fun challenge you’ve set yourself.

Special thanks to Mavic

This trip was made possible by the lovely folk at Mavic, who supported me with the use of some incredible kit. I was blown away by their wheels. They’ve been leading this game for many years though, so this was no surprise, but their apparel, shoes and helmet really were of the highest standard. Based in the beautiful Town of Annecy, and able to ride and test product on the incredible roads of the Semnoz, means they can put product through its paces in all conditions, and oh boy does it show.

Wiggle were out to see the 2019 Mavic Collection of wheels, tyres, clothing, shoes and protection. There’s some exciting collections coming your way – be sure to keep your eyes peeled.

Rob loves all things bicycle related, and spends all his time negotiating between family life and saddle time. Occasionally they all come together as one. Mantra? It’s not a race, but I’ll take great joy in stealing your KOM.