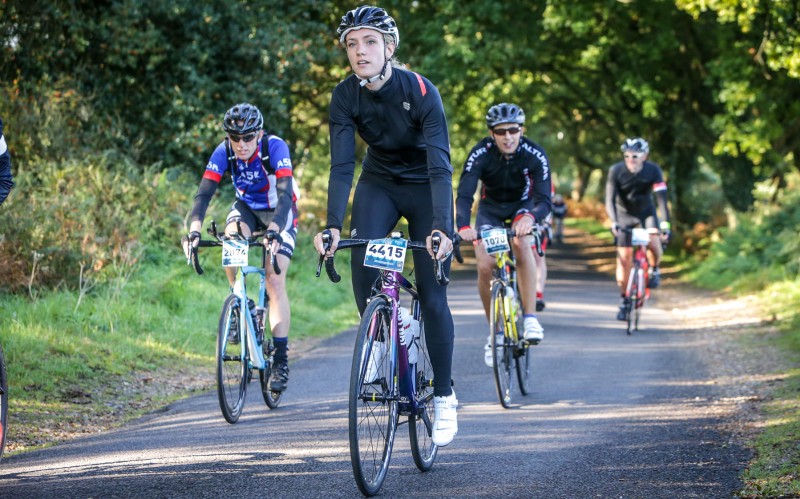 On Saturday 16th of September, Wiggle athlete Alice participated in her first ever sportive. As a keen runner, Alice was completely new to road cycling; she started in March and learned how to ride in road cleats only three days before the event. Here's the story of how she got on.

Starting road cycling seemed quite daunting at first, or at least it was for me: riding a road bike is different from riding a commuter bike and it really helps to have a friend or relative you can ask for advice. The first big step for me was to buy a proper road bike. Road bikes can cost more than commuter bikes and I feared that it was too much of an investment for something I had never done before. However, believe me, if you want to start road cycling you will need a proper road bike that has been designed to be light and comfortable for long distances otherwise it will be difficult to make a lot of progress. Since I would use my new road bike to train on my daily commute, I used the Cycle to Work scheme to buy it which let me spread the payments over 12 months and benefit from a tax saving.

As well as a road bike, the most important things to invest in are a helmet and a pair of chamois bib shorts that will keep you comfortable for longer rides. I had always made fun of bib shorts that just looked really weird, only to realize that the pad was there for a good reason! In the end, I found some great Isadore bib shorts and a matching jersey to start with that were comfortable and didn't look weird.

When I started riding my new bike on the weekends I used flat pedals and wore my trainers because I was too scared to use cleats. Seeing the prices of pedals and cycling shoes made me reluctant to invest until I got used to the new bike. I’m lucky enough to have a boyfriend who’s an experienced cyclist which definitely helped in giving me more confidence in getting out and discovering some nice routes locally. If you’re starting out on your own fear not; there are plenty of routes that you can find on cycling apps like Strava and download onto your GPS device or your phone.

I started by riding 50km to 70km every Saturday or Sunday. I decided that setting a goal for myself would be a good motivational tool so I signed up for the Epic route for the New Forest Sportive (160km!) but more on that later…

Some colleagues at work (who have been cycling for years!) invited me to ride with them on a 100km women-only challenge ride in July which tuned out to be pretty tough. About 40km into the ride torrential rain started and didn't stop and by the last 10km, I was feeling dizzy having not eaten enough, something I definitely do not recommend! However, it was totally worth it and the feeling of accomplishment, having done my first 100km ride, and the feeling of being part of a community was indescribable.

I also felt more ready than ever to take on the challenge of the New Forest sportive, knowing that I could do 100km. 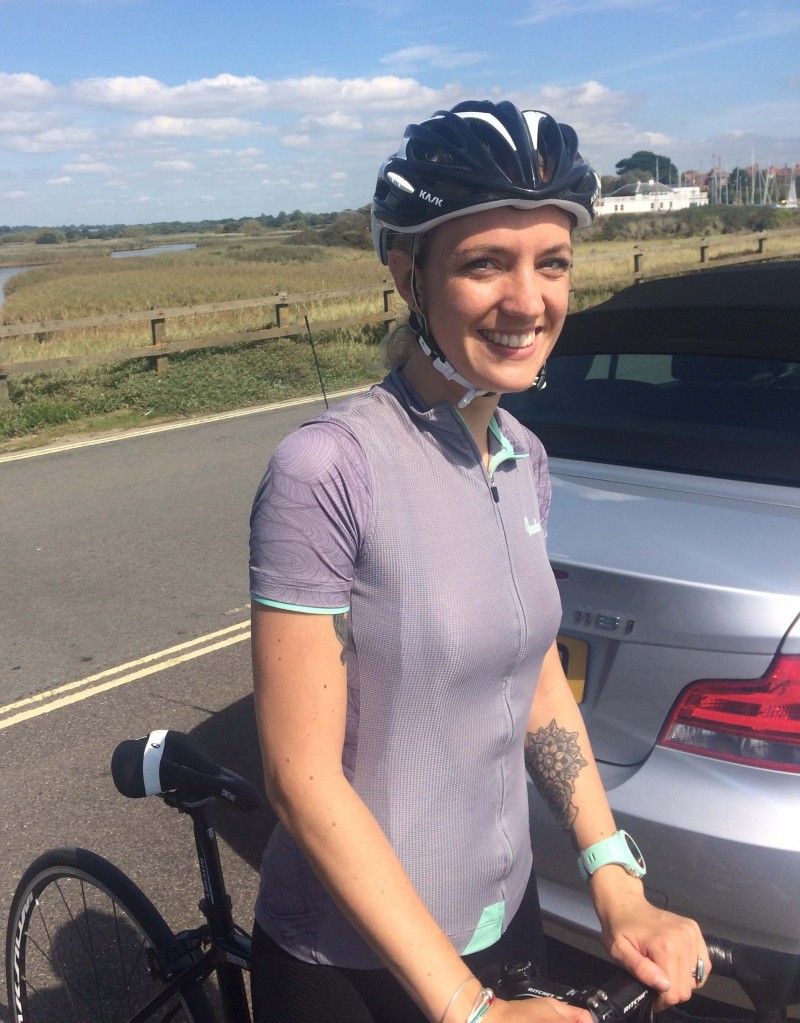 One thing that will always remain true in life: most things don’t happen as you planned them to.

First of all, I had bought some Giro road cycling shoes two months before the event so that I would have plenty of time to get used to them. However, I didn’t plan on being too scared to use them until I was almost out of time, with only three days to go.  Unfortunately, I do not have any tips or lessons to give you on how best to avoid falling. I just went out in the parking lot next to my house and gave it a go, and yes, I did fall a few times. The trick is not to be scared of hurting yourself and to ride fast enough to be able to clip in your other shoe. By the time the event came round I was hardly an expert though; having only worn my new shoes once before, I was constantly scared of falling whenever I needed to stop and had to make an effort to remember which side to unclip. I almost fell at a feed stop which made a few guys behind me laugh but oh well, it’s all part of the experience!

Secondly, I left the logistics of getting to the start in the New Forest until the day before the event and realized that the closest train station (I do not own a car, and do not drive for that matter) was 20km away. Looking back I think if I had been more organized I could have probably found somebody to give me a lift which would have not only saved me time but also a lot of cycling!

In any case, I woke up bright and early on that Saturday - 5am! My boyfriend had also signed up to the sportive and we had prepared our essentials the night before; bottles of water, tire levers, pump and multi-tool. The less to worry about in the morning the better! I chose a full Sportful outfit because I love their design, the fit of their jerseys and also how comfortable their bibs are. I filled my pockets with gels and bars and we left my house for the train station.

The ride to the start didn't go quite as smoothly as we hoped. It was cold, we managed to get a little lost and we were riding part of the route in reverse, past other riders who had already started so it was mentally quite discouraging as I knew I was going to cycle the same way again. It was already really crowded when we finally arrived to register and collect our numbers.

A sportive is not a race but it is easy to forget this for the first few kilometers and hard to not try to compete with everyone by overtaking and showing off a little (don’t judge me, I’m sure we’ve all done it). It was only after the first 30km (remember - I had done 50km in total counting the ride from the train station to the start) that I realized that if I wanted to be able to finish the whole ride I needed to go at my own pace and stop trying to catch whoever was in front of me.

The feed stations throughout the route really helped. I would only stay for a maximum of 10 minutes as I felt like it was harder to get back on my bike if I was standing for too long, but eating regularly helped my body to stay topped up with much-needed fuel for the rest of the ride.

Around 73km into the route (93km in our case), the sun turned to rain. It was also around this point that we reached a split on the route. Most sportives offer a choice of distances; the route follows the same roads but splits at various points which means riders can choose a shorter distance on-the-fly if they start to feel tired or unwell. I was starting to feel tired and had a tough decision to make: either go straight ahead to do the epic, 160km as I had planned and as I had told everyone at work I would do, or turn left and do the standard 94km route. I knew that it wouldn't be over once we crossed the finish line and there was still the 20km ride back to the train station which would make it a 200km ride in total, quite a distance even for an experienced cyclist, so I put my pride aside and turned left.

The end of the ride was mentally challenging, it was pouring down with rain and we got a puncture a few kilometers before the finish. However all of this was soon forgotten once we crossed the line, seeing so many people with big smiles on their faces, having all the event staff offering congratulations and getting a medal made it all worthwhile. I was glad that I remembered to bring cash so that I could re-fuel at a food van before heading home. 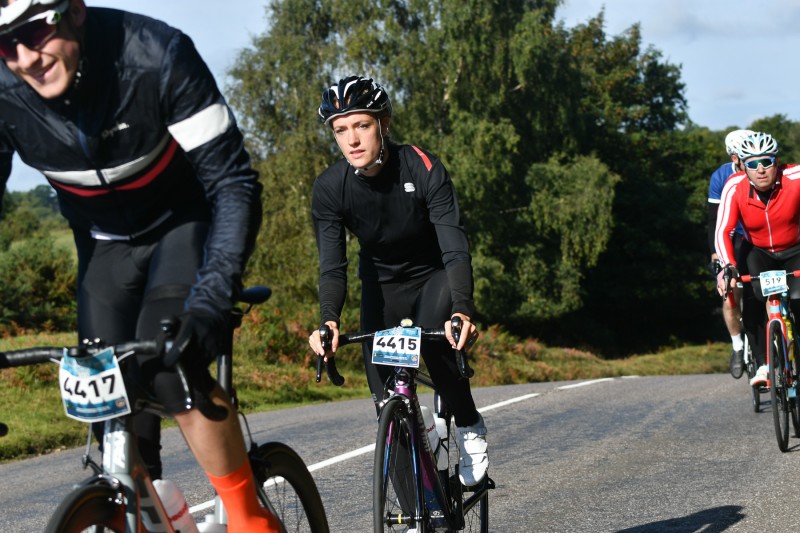 Sportful Women's Fiandre Light NoRain Top:  This top is windproof and water repellant so was an obvious choice for this ride. Even towards the end of the ride when it was soaked I was warm and dry underneath. The fabric is really breathable which meant that I didn't feel sweaty even for the brief periods that the sun came out. The soft fabric is light and the cut doesn't feel restrictive so it was comfortable for the entire day.

Sportful Women's Luna Bib Tights: I had originally planned to wear the Sportful Women's Fiandre NoRain Bib Tights but worried that they would be too warm as they're rated down to 0-10 degrees. The Luna tights proved to be the ideal alternative. The pad is perfect for long distances; it has exactly the right amount of thickness for being comfortable on the saddle and added warmth. The fit is amazing and it's really obvious that they were designed specifically for women, with seamless fabric that avoids any irritation (I’ve experienced this quite a few times with other bib tights!). I would highly recommend them if you’re going for a long ride, be it in Autumn or Winter!

Giro Women's Solara II Road Shoe: I chose these shoes as they were one of the best for value for money. The ratchet fastening can be tightened as much as you need and the sole is very stiff compared to what I was used to. Like many cycling shoes, they came up pretty small so I recommend trying at least one size bigger than your usual size (I'm a UK 5.5 and ended up with a UK 8!).

The improvement that wearing road cycling shoes instead of trainers made was incredible. Cycling in road shoes makes you feel completely connected to your bike and able to transfer more power through the pedals which makes you go faster. It felt like cycling became 10 times easier but also more enjoyable. I regretted not wearing my Sportful Fiandre Windstopper Booties towards the end of the ride when I could feel all the water that had got inside my shoes but other than that they did the job! 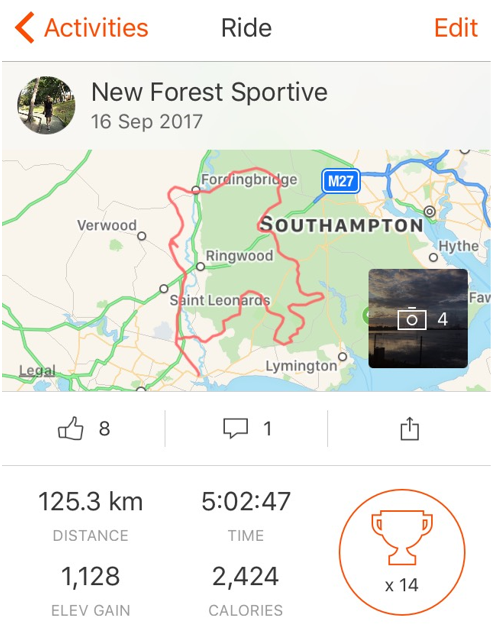 All photos taken by Sportive Photo.