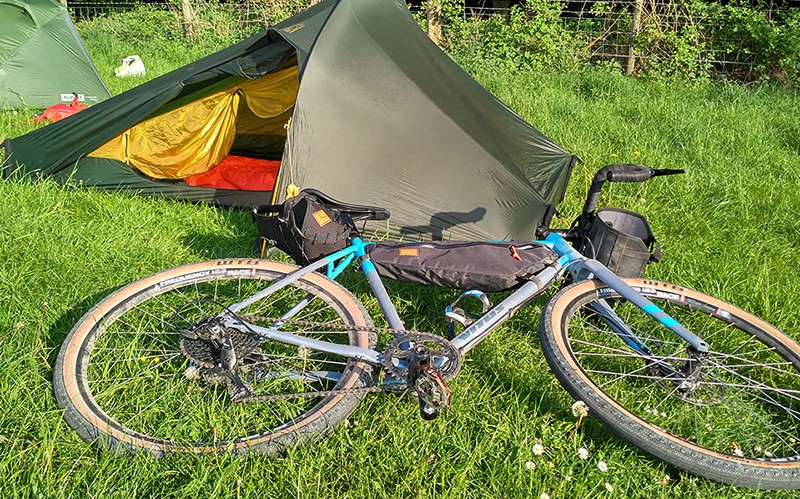 The South Downs Way. Britain’s first-long distance Bridleway. A hundred miles in total, stretching from England's first capital city, Winchester, all the way to the white chalk cliffs of Eastborne.

Lucky for me, it’s right on my doorstep. It's been on the to-do list for a while so this year I finally decided to get on with it.

The record for a one-way trip is currently held by Ian Leitch at 7 hrs 3 mins and he also holds the round-trip record at 15 hrs 35 mins. Going possibly one better, Rob Colliver holds the record for the double-double at 55 hrs - there and back twice in one go.

I wasn't looking to break any records but I started with a lofty ambition to ride the whole thing in one day. However, since I also wanted to enjoy it, I took the more casual option and decided to do it in two days instead, with an overnight stop inbetween.

Now, most importantly, I had to decide what bike to take.

Working for Wiggle, there was no shortage of opinion in the office and after a healthy amount of debate I decided on the steel-framed Vitus Substance V2 APEX , a sturdy beast built to tackle any terrain.

A set of frame bags from Restrap provided ample capacity for a two-day adventure. The Saddle Bag Holster & Dry Bag and Bar Bag Holster, Food Pouch and Dry Bag are tough and easy-to-fit with room for the bulk of my kit. The Frame Bag provided additional storage space without being obstructive. I'd chosen to travel ultra-light so my Nordisk Telemark 2 Light Weight Tent, weighing just under a kilo, along with my Mountain Hardwear Lamina Z Spark Sleeping Bag were perfect.

It took some practice to fit everything in and, more importantly, to get it balanced but I was all set for my mini-adventure.

Setting off from Winchester with a pal we could not have looked a more odd couple. Me on my gravel bike, 650b wheels, 11 gears, fairly light on kit. Him on a on Trek Remedy 29” enduro rig with loads of bags and a massive rucsac.

The South Downs Way is 95% bridleway with a few tarmac sections. The Substance proved to be a great choice for the terrain, except for a few sketchy moments. For the most part a fantastic bike that could cope with the majority of the route with ease.

There were sections where the two different bikes had their time to shine. The Substance was able to get to the top of most ascents with relative ease and I could happily cruise along on the flatter sections. However, as soon as it got too lumpy or descents got too steep or even a little loose the mountain bike was able to pull away pretty quickly.

Differences in performance could have been attributed to my lack of confidence on fast descents. I did sometimes feel that the bike was sliding around on the WTB Byway 650b 47c tires. I was also paranoid about punctures on the loose terrain and was in 'preservation of inner-tubes' mode rather than 'shred it' mode. I have since converted it to tubeless to mitagate the risk. Even with this considered, I think the mountain bike would still be faster.

The Substance comes equipped with a SRAM APEX 1x groupset. The 40-tooth chainring and 11-speed 10-42-tooth cassette meant the range of gearing was just right. There were no chain drops and the gaps between gears was good for the terrain, with the big top cog more than generous enough for all but the super-steep ascents, where it was just quicker to push.

40 miles into the first leg of our journey, we set up camp with the intention of starting fresh the next morning for the final 60. However, following a long, relaxing sit down with a cream tea the train at Southsea began to look appealing so we called it a day and headed home.

That leaves me with unfinished business. Watch this space because next time I will be riding the full distance.

Back to the question of which bike?

Run about a bit, ride bikes in-between. Super happy when I’m outside exploring and testing myself. Get supported by my amazing family (#Team P-G). Follow my adventures on Instagram.