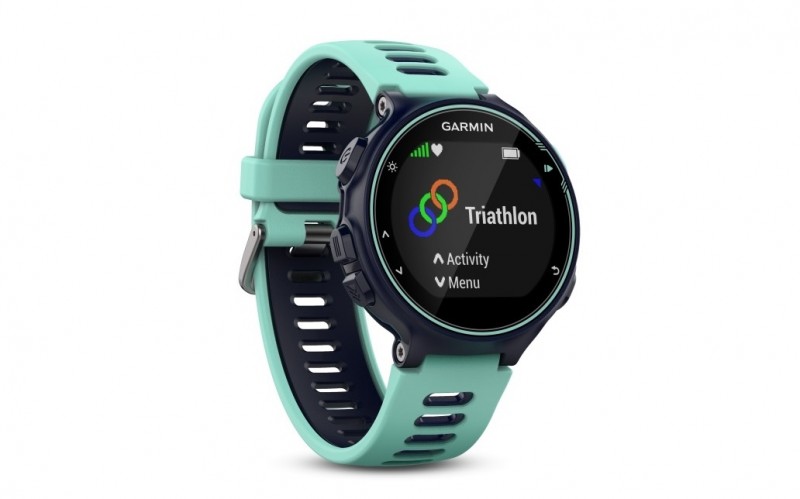 When news about the brand new Garmin 735 XT GPS Watch surfaced, we were beyond excited. This watch was created especially for the multi-sport go-getter, who wants to really understand how they're performing, and how they can improve.

If that sounds like you, then read on... our Accessories Marketing Manager asked our in-house action hero, Andy, to take the watch for a spin (and run and walk…).

This Tri-specific watch, on the face of it (excuse the pun), seems very similar to the Garmin Forerunner 630; and in many respects they share so many attributes that they could be twins. However, the new Garmin Forerunner 735 XT has been adapted for swim, bike and run; whereas the 630 is run and bike focused.

The charging of this unit works exactly the same way as the Garmin FR630: it simply clips onto the side of the watch with no fussing.

The first thing that I noticed about this watch, is the weight (or lack of it). At first the strap felt a little thin, and as if it's not really up to the job (AMM – Ridiculous thought Andy. This is a Garmin!); but once on and fastened, you can feel that the strap is strong, even though it's so flexible. It actually feels great when being worn, as it moves with your wrist and isn't restrictive (AMM - Told you so…).

The Forerunner 735 XT is stunning to look at, and I found myself wanting to wear it all day long. Usually I'm one of those guilty parties who just wears a watch for training; but the 735 XT took up permanent residence on my wrist, thanks to two massively appealing characteristics...

First, it simply looks good, and you forget you are actually wearing it.

Second, the game-changing built-in HRM. I became obsessed with checking my daily activity and step count! I used it alongside ‘myfitnesspal' and the daily challenge became how low I could get my heart rate over the course of the day (AMM – Please don't conk out on us. This review needs y!).

Putting it to use

The built-in HRM was a revelation to me! Unlike all other watches I have used over the years, the Garmin FR735 XT lets me track my heart rate, without having to wear an uncomfortable chest strap, which never really felt natural to me. I'll confess that I used to ditch it, rendering most HRM watches useless and a waste of money - or is that just me?

The built-in HRM tracking also means that you can assess your efforts continually throughout the day; so it doubles up as an all-day activity tracker, and not just a training watch. I also really liked that because I was wearing it all day, I never had the inconvenience of having forgotten my watch for a lunchtime training run!

I wasn't too sure about the accuracy of the HRM though; my normal resting heart rate is 43bpm but there were several occasions when I registered 40bpm. I've never actually sat wearing a chest strap all day though, so I guess that I don't really know what to expect across the day. Also, we are only talking about a variance of one or two percent so that's not exactly a deal breaker. 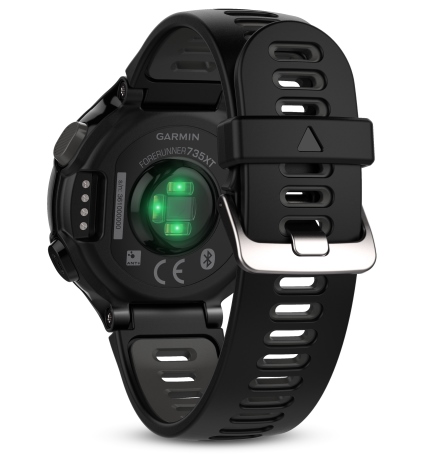 Taking a look at functionality

This watch is probably the easiest GPS watch I have used to date, and unbelievably intuitive in its functionality. I simply love the 'up and down' buttons, and they make total sense when using it. I actually navigated my way without needing to look at the instructions whatsoever (AMM – That's gadget Utopia! Although we'd suggest that you still check them, just to make sure that you're enjoying everything that it has to offer…).  There are five buttons on this watch, with picture guides on the screen: light, up/down, return to last screen, and finally the action button. Easy peasy.

The front screen (you can choose black or white background) shows the time and date extremely clearly and with one flick of a button (the up and down button).

Then, you can also check out the aforementioned heartrate; you also get a small chart of your last four hours, along with your minimum and maximum heartrate over that period.

One more press of the same button, and you can have your instant step count - compared to your daily target, and how far you have walked to achieve this step count (AMM – It's worth noting that those trips to and fro the coffee machine add up!). For me, this is one of the best functions this watch provides, and actually motivates you. Your watch offers a small vibration and a red bar to tell you when to move after you have been sitting immobile for too long; this will disappear once you have covered 100-150 metres - this is a must for those office dwellers (AMM – And office planners who will need to factor in that the aforementioned coffee machine needs to be at least 101 metres away. #justsaying).

Finally, and for me the reason for having this watch, is the Triathlon facility.

The Garmin 735 XT is by far the easiest watch to use for the multi-sport transition stages.

There are several on the market whereby you have to press and hold the button to transition between stages; and although five seconds is not a long time, when you are in a race it feels like a lifetime...

It is truly as easy as that; and for me, one less headache to think about.

Overall, this is a great watch; with an easy to use Tri-sport facility, and GPS facility.

It has converted me back into a daily watch wearer, rather than just putting one of for training. This is mainly due to its low weight and overall comfort - you simply forget you are wearing this watch. I found myself constantly checking out the fitness facility, and has made me even more active than I was before testing.

Well done Garmin on an amazing product, within a great price point.

(AMM – Andy is an IRONMAN triathlete, and by no means lazy or inactive. Even he was surprised at how long he spent sitting! Being able to track daily activity, and training, in just one watch is a no brainer for us. This is one to add to the kit bag!).