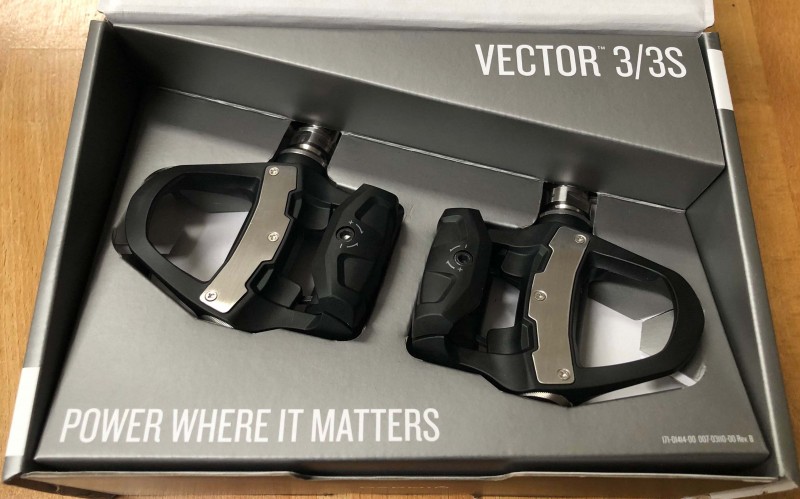 The Vector 3 dual-sensing pedal-based power meter from Garmin houses the sensors right inside the pedals, delivering reliable, accurate data on every training session. Wiggle rider Neil Towns has been trying them out.

Straight out of the box these are almost unnervingly easy. They look very similar to Shimano pedals and there's a pair of cleats nestled at the bottom of the box.

No batteries, pods or wires, just a left pedal, a right pedal, two cleats and a single sheet of instructions. There's also a couple of washers that can be used as spacers to allow a wider stance on the bike if needed but I pretty much ignored them from the off.

I opened out the sheet of instructions and I was unnerved again by the simplicity. Step one: install the pedals like you would any other pair of pedals. That's it.

I began to feel a little more at home at the last step which was to pair the pedals with your bike computer. At last - something that made a point of being technical.

No torque wrenches, no space tech, no pixie dust necessary!

I installed the cleats on my shoes in the same way I do with all my others and sat down to have a cup of tea. I had time on my hands I wasn’t expecting!!

It was just as easy to configure the display on my Garmin Edge 1030 to show the output from my new Vector 3s  - optimum power display, 3s average, left-right balance, cadence etc.

A piece of cake. No really, I had a piece of cake with the tea - Pineapple Upside-down cake, made by daughter number two.

But it was really easy. As easy as installing a new pair of pedals.

So off for a ride to see how these pedals keep me on the money on the bike! 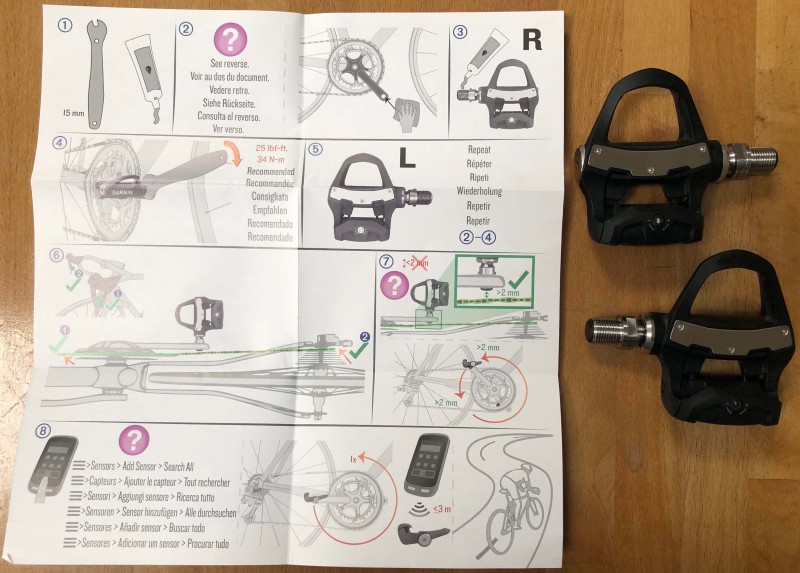 So I expected that riding with the Garmin Vector 3 I would appreciate the data side of things. I also expected that I may resent the compromise needed on straightforward pedal performance.

Having used Shimano SPD-SL and Speedplay extensively in the past I know how a good pedal feels and performs. A Garmin pedal without the power element has the potential to be a compromise on the best of pedal options.

I have to say I am pleasantly surprised by their performance against other, 'ordinary' pedals. The bearings are a little stiff straight out of the box, similar to a Shimano 105 pedal, so they don't automatically rotate to the ‘ready’ position for the first few rides. You'll need to remember to go steady at the moving off stage and nudge the pedal round to get your cleat in.

No big deal, and even after the first few rides the bearings have started to ‘work their way in’ so that now they do ‘return to ready’ more easily.

Once clipped in and riding the Garmin Vector 3s quickly became a part of the ride. They didn’t stand out as anything other than a great pair of pedals with the added advantage of transmitting live power data to my Garmin Edge 1030.

I’d set up a couple of screens for the addition of power (dead simple to do) but the Garmin Edge 1030 also automatically set up a pedalling dynamics screen when you connect the Vectors.

From Cadence to 3s Average power through to left-right balance, power phase and countless other metrics the amount of data captured is really very impressive. Having used a single-sided meter from other brands before I have to say the information captured and then displayed on the screen as you go is incredibly comprehensive.

Check out Neil's review of the Garmin Edge 1030

The level of detail that the pedals transfer to Garmin Connect post-ride is, frankly, quite bewildering in terms of breadth and depth of information. It's going to take days, maybe even weeks, to interpret and make use of.

For example, it captures where on each pedal your placing your power – my right foot is on average 7mm off centre so I’ll need to adjust cleat position a little there to get the best balance.

I’m 51% left and 49% right in power terms, I can live with that but if you were way off then you might need to consider a professional bike fit which could add some serious performance gains to your bike riding.

I can also see that my power phase (when I’m generating a forward motion in the crank rotation) is pretty good but I can make some improvements to a more ‘all-round’ profile.

There's still a lot of data that I don't understand, even after the first few rides. It will take some research to get the best value from the Vector 3s but already I’m very excited about delving into the science and physiology of bike riding.

I’m happy to say that the Vector 3s have, so far, been most useful in building a picture of my performance for post-ride analysis rather than driving action on the bike.

I’m still looking at the road, enjoying the thrill of the outside, rather than riding transfixed to the numbers on my handlebars. I’m sure that at some point in the coming months I’ll be using the numbers on the display to give me the impetus to push a little harder, or to back off early into an ascent of an Alpine giant.

All in all these pedals have been fantastic right out of the box. I’m sure there are pros and cons versus other power options and pedals. However, they are a great choice in terms of flexibility (put them on any bike in 3-4 minutes), ease of use, integration with other devices, price/value for money and from a weight perspective.

If you’re making the move into training with power, these pedals from Garmin really are a great investment.