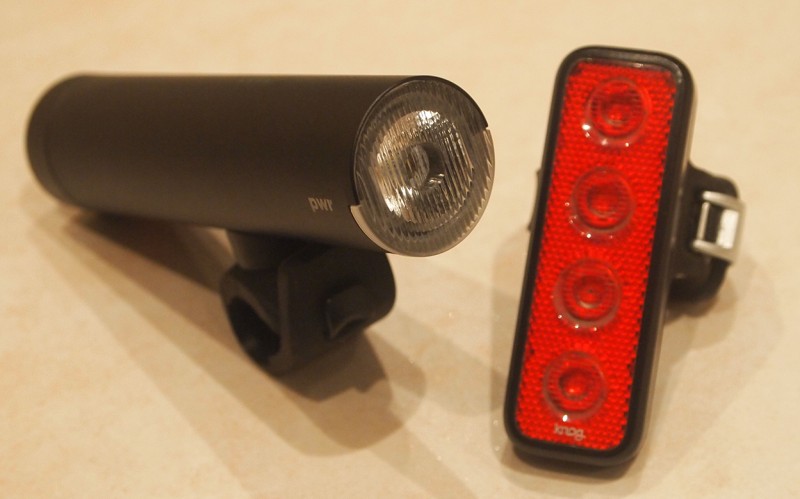 In this review, staff rider Nassrin shares her thoughts on two of the latest bike lights from Australian brand Knog.

As a year-round cyclist, I demand a lot from my lights. My cycle commute is 37km each way and although during the winter months I alternate with the train more often, even on the days I take the train there's a ride from home to station, then station to office. The combination of quiet lanes and heavy traffic means I need to make sure I'm super-visible. On most weekends you'll find me exploring the local roads in Hampshire, a combination of wide-open heather-covered heaths and shady forest so even in daylight hours I like to feel 100% confident that my lights won't fail.

In October I was sent a pair of the latest Knog lights to try. Great timing since at the end of the month I was due to compete in Red Bull Time Laps, a 25 hour relay, so I'd need to train before and after work when daylight hours would be short.

My first impression of the Knog PWR Rider 450L was that I instantly loved the design! The CNC-machined aluminium body is finished in a smart matt black and has a satisfying amount of heft. There's a discreet button at the rear which releases the battery cover and another at the front to operate the light. To attach it to your bike, there's a rubber mount with integrated strap which initially needs to be attached using a screw and the tiniest hex-key you will ever own - fiddly but thankfully a one-time-only job. Once that's done, it's simply a case of pulling the strap over your handlebars and stretching it over a hook on the mount. Yes, it's a long unit but it's also narrow so even with my bell and Garmin the handlebars weren't too crowded. 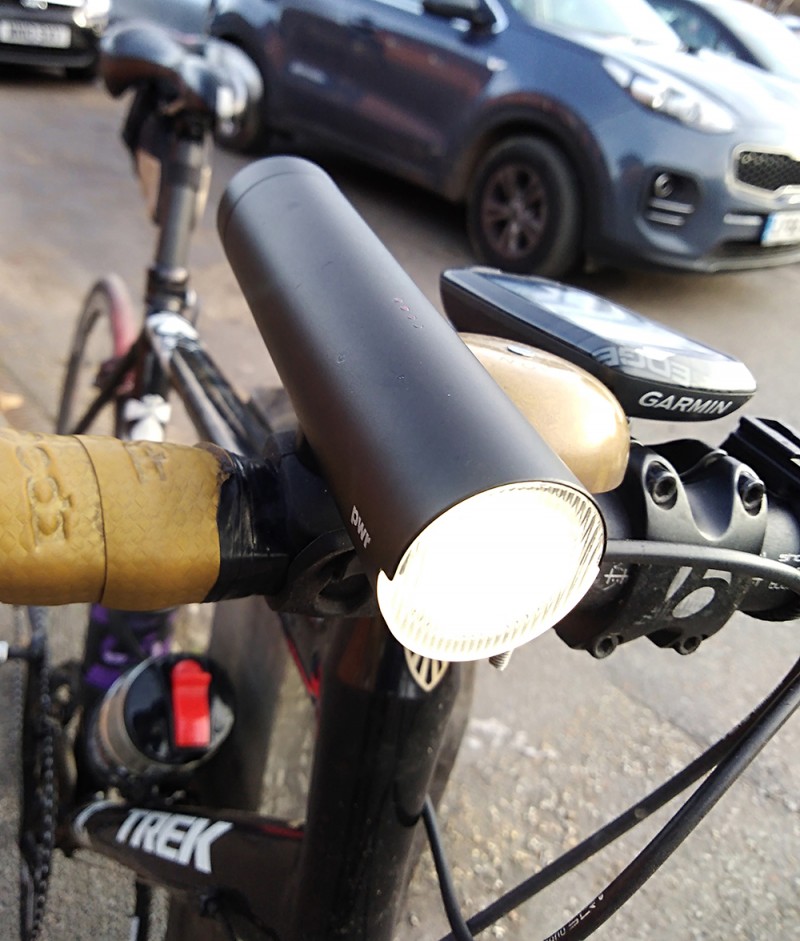 Despite my initial reservations about the miniscule 'on' button, I've found that even in winter gloves I could operate the light without drama. To turn it on, you just hold the button and then you can press it quickly to scroll through the five pre-programmed modes. The main two settings are the 450L 'Ride' mode (lasting 2 hrs) and the 200L 'Commute' mode (lasting 5 hrs), then there's the usual flashing options and, even more excitingly, Knog will soon be releasing a 'Mode Maker' app for further customisation possibilities.

The beam is eliptical rather than a more traditional circle so a wider field is lit and visibility is boosted for other road users. For a long commute like mine, I like to charge it after every ride but it uses the same micro-USB as most mobile phones so there's always a cable lying around that I can use. There's four battery indicator lights on the top of the unit that give you some peace of mind if you're in doubt about how much juice you have left. 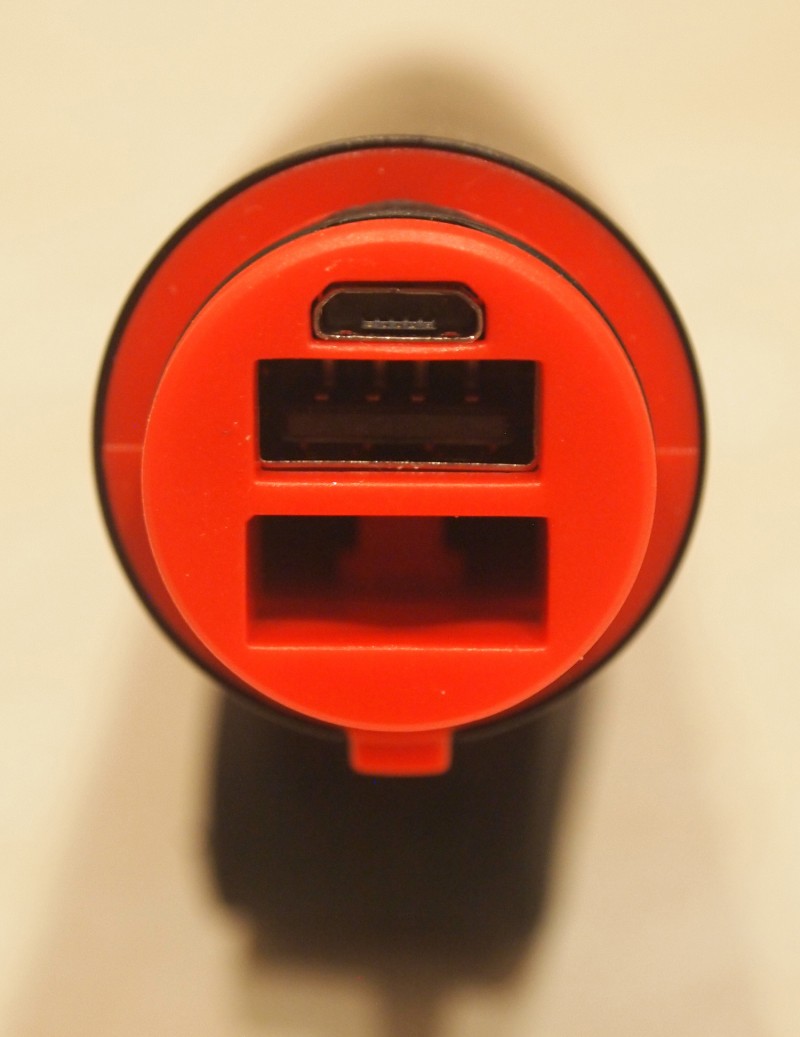 I alternate between the higher and lower settings depending on how much traffic and street-lighting there is - some cyclists use inappropriately bright lights which dazzle my eyes and I wouldn't wish that on others! Whilst the highest setting provides enough light to see by on roads where there's other light sources, I should add that I'd prefer something a bit more powerful on totally unlit rural roads and this definitely isn't one for exploring the woods late at night.

According to Knog, after one hour riding with the light at 450 lumens there's enough juice to get your phone up to a 35% charge. Whilst I haven't tested this to the letter, this added functionality was useful when my journey home from the Red Bull Time Laps was unexpectedly delayed and I needed to call home.

The latest evolution of Knog's rear light is surprisingly light whilst still feeling sturdy. The four LEDs are mounted in a reflector to boost visibility and pack a massive 44-lumen punch, enough to be seen from 1.2km away. It's operated by a soft button on the back which is sealed into the rubber so it feels like it will be more resiliant, given that it lives on the part of the bike that gets the most road-spray and dirt. The single button is the on/off and allows you to select from two solid modes or three different flash sequences. On the brightest setting it will keep you going for 2.6 hours but 'eco flash' mode has a life-expectancy of a massive 55 hours per charge! Like the PWR, you can charge it at your desk via a standard USB port but there's no need for a cable this time - it plugs in directly. 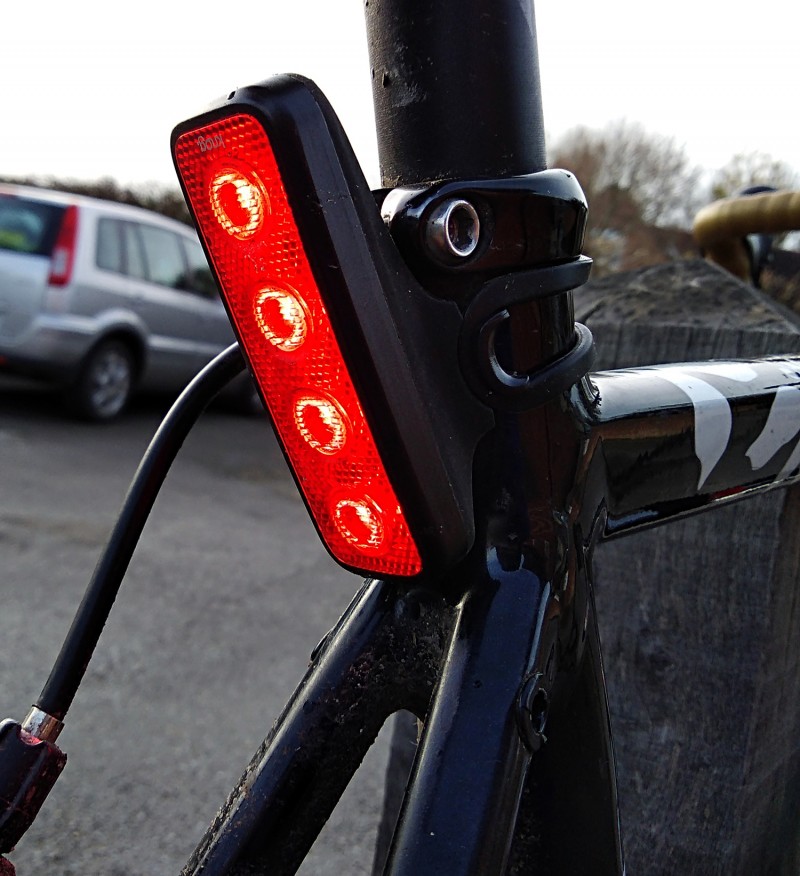 I've owned several Knog rear lights in the past because I've always thought the light output represents a lot of bang for your buck. The rubber fastening loop with metal clasp is convenient for taking the light on and off when you need to lock your bike in a public place. However, in the past this clever design has always been the light's downfall; the metal eventually wears through the rubber and since the rubber has historically been moulded to the body of the light this renders the light useless. I was so pleased to find that this issue has finally been addressed and the rubber ring is now totally seperate and easy to replace in the event of failure. In fact, three rings are supplied in three different sizes. For the weekend, I use the larger ring to fasten the light to my seat-post but for my commute I switch to the smaller ring to attach it to my oversized saddle-bag. 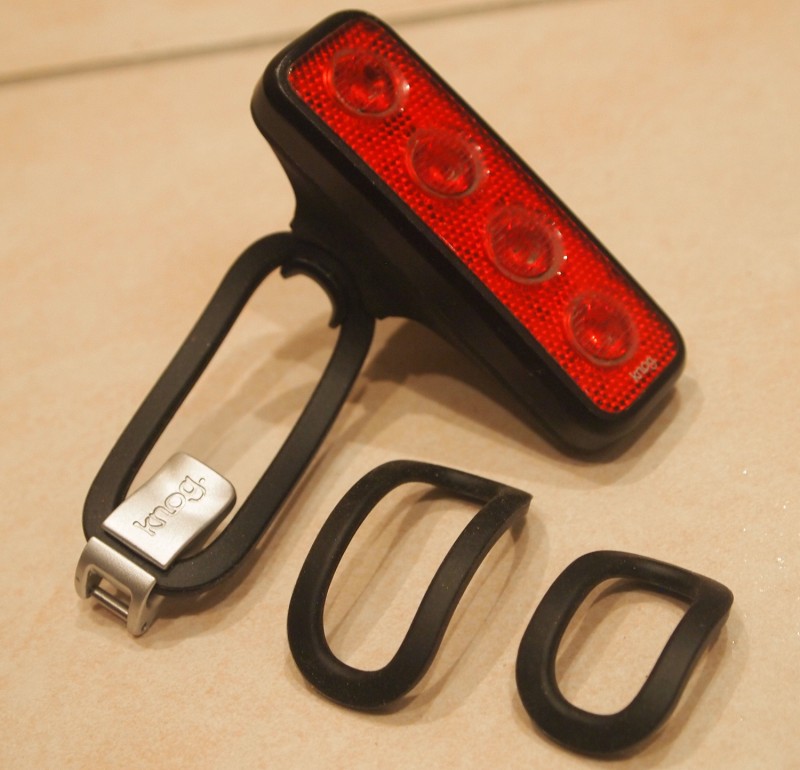 In summary, the Knog Light Blinder Mob V 4 Eyes Rear and the Knog PWR Rider 450L seem to be a perfect combination for rides where you need to be seen but won't be going anywhere completely unlit. They've quickly become my go-to commute lights for the convenience of being USB chargeable, having great battery life and being easy to take on and off.