YOU CAN: Colin Wallace 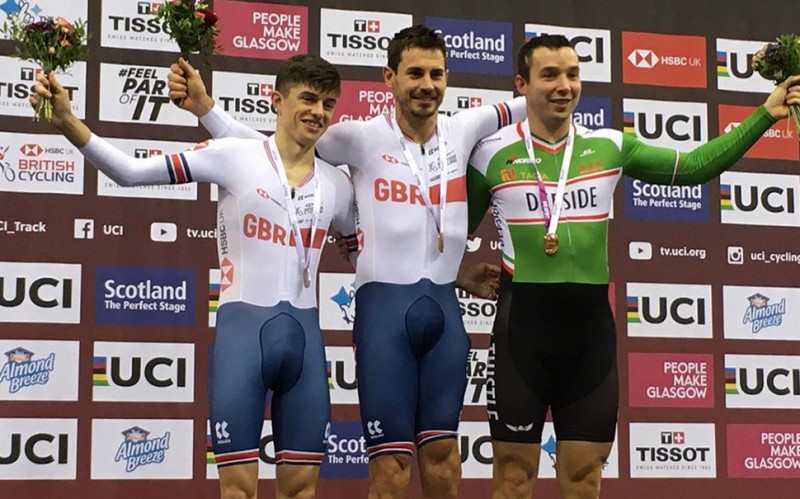 Colin Wallace had been diagnosed with Multiple Sclerosis only eight months before we met him earlier this year. Previous to his diagnosis, he had been a rower for Team Scotland and was also a keen triathlete. He now uses cycling as a way to stay active and competitive without aggravating his symptoms. We caught up with his progress for the year.

2019 has been a whirlwind year for me. Following my diagnosis with MS in April 2018, I channelled my competitive energy into cycling and got myself a place on the British Cycling para program.

Having only started training in earnest in October 2018 I rode my first race on the track in January - the National Para Track Championship. This baptism by fire was an incredible experience and my performance bought me a place on the British Cycling Para Foundation program.

Since then, I've also had the opportunity to race on the road. In July I was third in both the road race and the time trial in the National Para Road Championships.

I have attended multiple training camps on both the track and road with the squad and must recently I competed in the para-cycling track international which was held alongside the track cycling world cup in Glasgow. I was delighted to take another third-place.

In 2020 I'll be building on my successes on both the road and track. My long-term aim is to reach the Paralympics in 2024. 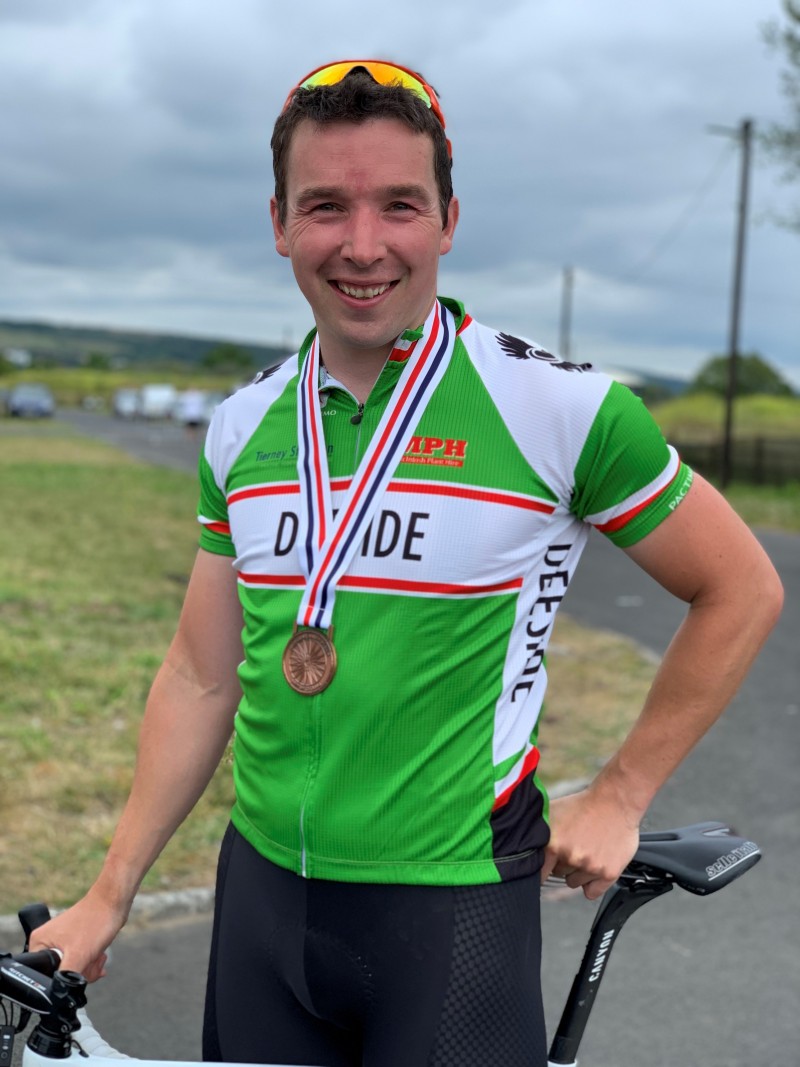 Colin has always been competitive. He’s had a successful career in rowing, winning National Championships and competing for Team Scotland. Following his retirement from the sport in 2011, he moved onto triathlons and then Ironman.

In April 2018, Colin was diagnosed with Multiple Sclerosis. It’s a condition affecting the brain and the spinal cord and symptoms vary between individuals.

Colin has found that for him, cycling is a way to stay active without aggravating his symptoms. With some encouragement from his wife, he has taken a place on the British Cycling Para-Cycling program, where he can compete in the C3 category.

Through discovering cycling, Colin hopes to inspire others with disabilities to try a sport. He is also planning to raise money for the MS Trust when he rides three of the most famous alpine climbs, with a combined elevation of 5000 meters, in one weekend.

Gotta start somewhere - might as well be the National Championships!

Gotta start somewhere - might as well be the National Championships!

As a rower, my road bike was always just a tool for cross-training. I’d head out for rides with friends now and again, but I didn’t even consider racing.

Following on from my MS diagnosis, I discovered that cycling was a way I could continue to push myself. Cycling helped me to build up the confidence I had lost.

To give myself something to work towards, I tried out at the talent identification testing with British Cycling in Manchester and was successful in being selected onto the Para-cycling program.

Training began in earnest with sessions out on the road in Aberdeenshire before the Scottish winter kicked in. As the weather began to turn, my training continued on the turbo in the garage.

British Cycling had set me a varied training plan, but strangely enough, I found the harder sessions the most enjoyable. 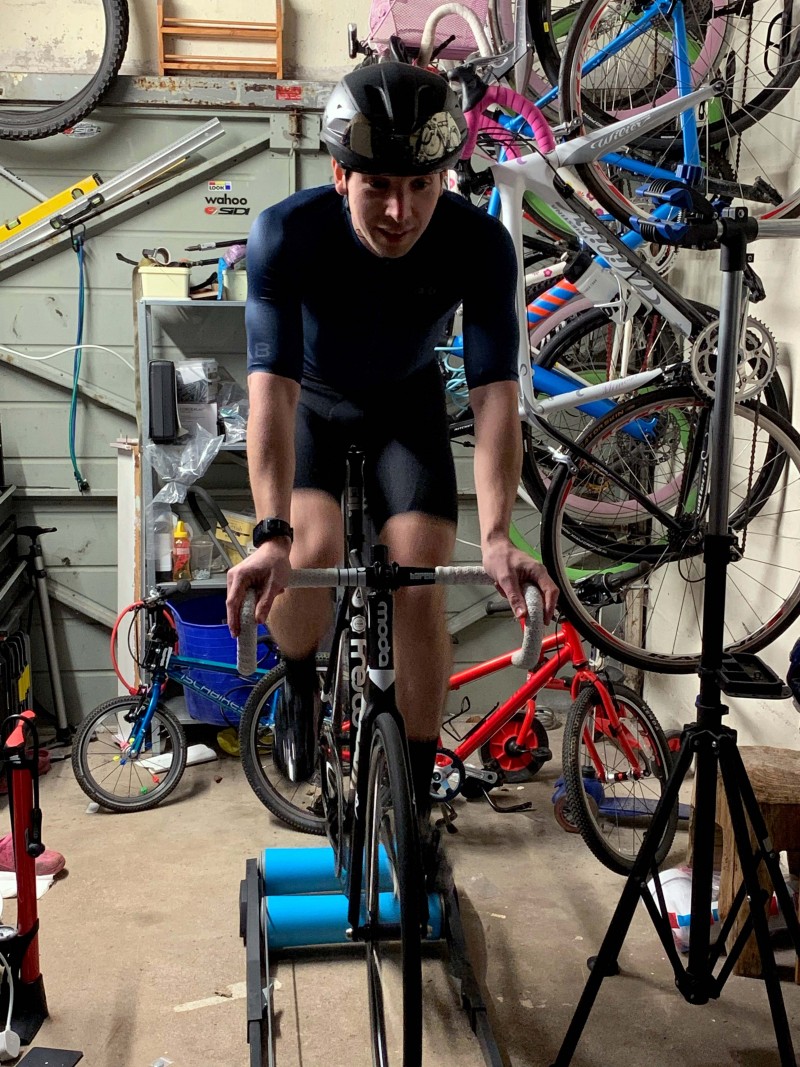 Getting started on the track

I’ve always had decent bike handling skills on the road but until I was accepted onto the British Cycling program I hadn’t been on a velodrome. The nearest one, The Chris Hoy in Glasgow, is a five hour round trip.

I've always been a fan of track cycling. With my new-found confidence and the gains I was making in training, I was ready to try it for myself.

I set myself a goal for extra motivation: I was going to enter all three para-cycling events in the British Track Championships. The 1km time trial, 200m flying lap and 3km individual pursuit. With only 15 weeks to prepare.

My bi-weekly velodrome sessions began in October.  Working full-time and living so far away from the velodrome posed additional challenges. However, it only took one session to confirm I’d made the right decision. The only thing slowing me down was the wide Cheshire Cat grin acting as a windbreak!

Thanks to the team at the velodrome and the fantastic para sessions, I learned how to ride the track efficiently and picked some excellent extra sessions I could do back home.

My first race. What could I expect?

My two initial goals were simple. Don’t come last and don’t fall over. Manageable and realistic.

The first nerves started to creep in when the start list was released, featuring several Paralympians and MBE’s. Not to worry. I just needed to focus on my own performance.  Everyone must start somewhere.

I packed my bags with my new kit, checked my track bike and loaded the car up for the 350-mile journey to Manchester. I’m lucky to have amazing employers who allowed me the day off on Friday so I could travel on the Thursday evening for registration, together with my support crew (consisting of my wife and two kids).

After registration, I was keen to check in at the hotel get a good night sleep before my first ever competition. Unfortunately, our three-year-old, Evie, thought better of it.

It was an early start on Friday morning. Any nerves were quickly eased thanks to the officials, staff and volunteers as well as fellow athletes who were all so supportive and friendly. Being in the track centre was an experience I would recommend to anyone who gets the opportunity.

An hour before my event I started to get prepared, following the lead of the more experienced athletes. All bikes must be checked to ensure that they conform to UCI standards and mine was no exception. Thankfully, the commissaire only had to briefly lift my bike to confirm that it fell within the weight limit. The pro-level, super light carbon bikes with carbon disc wheels had to be weighed.

‘Are these the wheels you’re racing with?’ the commissaire asked, eying up the metal-spoked wheels that had come attached to the £400 bike. Sounding slightly sorry for myself, ‘they’re the only wheels I have’ was my reply.

After a brief warm-up on the rollers, I headed to the start gate for the 1km time trial. Challenge number one: don’t fall over. I was feeling slightly apprehensive, having never actually done a standing start out of the blocks.

I calmed my nerves, tightening my pro-looking Giro Factor Techlace shoes and pulling down the visor on my Giro Vanquish helmet.

I was off.  A little wobble out of the gate but then I was away. 4 laps to push myself to the limit and stick to that black line. I felt myself increasing in speed and confidence in each lap and before I knew it I was done! My first ever cycling race and was over in a flash.

When my wife found me in the track centre, was beaming from ear to ear with equal measures of relief and exhilaration.  As I cooled down, the race continued around me. I kept my eye on the scoreboard in the hope that I had met goal number two: don’t come last. So far so good. First race is done, both goals complete.

Next up – the 200m flying lap. I’d had some practice in Glasgow, so I was feeling confident as I circled the top of the track. Dropping down I gathered maximum acceleration and aimed for the black inside line, hoping that the banking would pull me around the 180 degree turn.

Following the first bend, I managed to hold my line low and power through the second half of the race and throw my bike over the line, just as I had seen Jason Kenny doing earlier that evening.

Once all rider had been posted my final finishing position was 6th. Not a bad place to be, especially considering that the first two riders had posted world record-beating times.

It's hard to believe that only a few months ago I had been unsure whether I wanted to race, but I’m so glad that my wife managed to talk sense into me. It’s the best thing I’ve done, and I’ll definitely be back. The buzz of velodrome racing is like nothing else.

Although I don’t have a pro-level lightweight bike (yet), I felt the part thanks to my pro-level kit from Wiggle. I’m looking forward to the spring so I can take my aero jersey and shorts out on the road.

An excellent, tight fitting, aerodynamic jersey.  It has nice long sleeves that have a snug fit. No matter how much effort I’m putting in, the jersey stays put and remains comfortable even for extended sessions.

The chamois is the comfiest I have ever cycled with.  The body-hugging fit and lightweight construction feel great.  I love the bib straps which grip nicely over the dhb baselayer and don’t move even on a long ride.

The lightweight performance fabric means a little more care is necessary pulling the shorts on, but you’ll be glad you made the effort and you won’t need to keep readjusting after that.  A truly fantastic pair of bib shorts.

The Aeron Lab Socks keep my feet nice and cool during a session on the velodrome or indoor trainer.  The unique fabric is comfortable and sits high on the ankle, requiring no adjustment during a ride.

The mesh baselayer is a well-fitting, warm, comfortable addition to any cyclists wardrobe.  It has enough stretch to get on but then hugs the body tightly, so you don’t need to worry about unsightly lumps and bumps under your jersey. Perfect under the streamlined Aeron Lab Jersey.

Quite simply the coolest bit of kit you can own!  An amazing fit that’s as comfortable as a normal road helmet. You barely feel the straps against your face but it still feels secure.

The best bit is that, when it comes to racing, you can just lift the visor off the top and just pop it in place, thanks to the super-strong magnets. You’ll immediately feel faster. The clever vents mean it doesn’t steam up as you get warm.

The stiff sole facilitates superb power transfer but they’re still comfortable enough to wear all day.  I thought the laces were for aesthetics, but they are attached to Velcro straps, so they tighten the shoes very securely.

Posted in Cycle and tagged you can, cycling, Challenge, Track Cycling, Para Cycling